‘Rare to find a heifer under $1200’: Prices forge higher at Ballarat + VIDEO Mr Simpson said that the penning offered more weight than the previous sale, and more lots that were presented in prime quality condition.

“There was a good competition from the feedlot sector and more processor buyers were present and active this time around”, Mr Simpson said.

“And there was certainly more restocker competition with local, southwest and Gippsland areas all represented and attempting to buy along with the regular commission buyer orders buying for interstate and other destinations”.

However, Mr Simpson said the participation on the online “Stocklive” bidding platform that has been well utilized previously due to the various COVID restrictions was more limited but nonetheless provided important access for those still unable to attend.

In an interview with Beef Central Mr Simpson the sale was commenced with the sale of a pen of “genuine-weight” bullocks, 623kg, that made $2340 or 375c/kg for Phillip Ford’s Turf Grass Ag.

Watch this Beef Central’s interview with Sean Simpson as he reviews the sale:

This sale of 15 Angus and others of slightly lesser weight, like T & BM Dodds’ pen of 13 Angus, 580kg sold at $2330 and 15 Warrnambool Ag Angus steers, 567kg that made $2260 he said sold at similar rates to the October sale before demand gathered momentum.

This was regardless of color and/or breed which was a better result than the month earlier sale, Mr Simpson said.

Among the Elders offering Mr Simpson said a large consignment of “local district but non-vendor-bred Angus steers from ML Stevens’ “Eurambeen East, was one of the many highlights of the sale.

Another feature of the Elders catalogue was the annual draft of Mick and Dawn Ernest’s Cherrymount Angus mixed sex weaners, from Streatham, with 30 years of Franc-blood breeding. 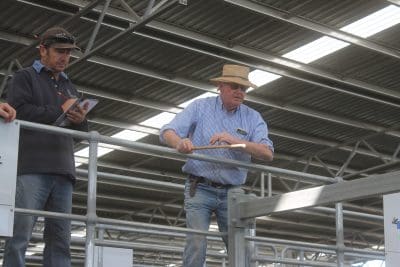 “Every month for the past four or five we’ve quoted the market as dearer, and last month I said it was the best sale I’d ever seen”, Mr White said.

“But this has exceeded that but it was a magnificent yarding, with more weight and better quality”.

“Our season here in the Ballarat district has been an exceptional one… better than last year and with another 43mm falling overnight”, he told Beef Central on Monday morning.

Mr White said the TBW agency offered cattle on behalf of 73 different vendors – many of them keen to move their cattle on while the market was running hot. 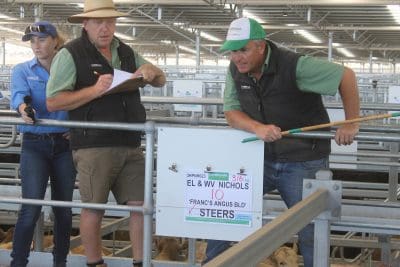 Xavier Shanahan, Nutrien also said Monday the weekend rain would be of enormous benefit for the district’s summer crops.

“Yes, we do have some vendors keen to move cattle on account of the current demand but they are mainly those with heavier cattle rather than our breeder operators”.

“It will now become a matter of grass management. The regrowth on the hay and silage-cut ground has been phenomenal and the summer crops will just leap out of the ground following this latest fall.

While agreeing the demand for feeder cattle was stronger Mr Shanahan said the market had previously seen rates of 400 and 410c/kg back in February, which when placed in context is not a whole lot better than eight to nine months ago.

Providing an example Mr Shanahan said Nutrien sold for Carisbrook clients, Phillip and Jacinta Leech, a pen of 33 February/March-drop Angus steers, 323kg, that made $1790 or 554c/kg.

“Now dollars for age both of these sales are serious money” Mr Shanahan said.

The demand for heifers, according to Sean Simpson was equally as impressive with the yarding averaging just shy of 450c/kg and $1550 a head.

Heavier heifers weighing 400kg and better he said were mainly sold between 390 and 430c/kg while the 300 to 400kg heifers found rates vary between 440-480c/kg with standout sales exceeding $5/kg.

It was rare in the heifer sale to find many pens sold for less than $1200 Mr Simpson said.

“That was steer money not that long ago”.

Cow and calf outfits also met with more spirited inquiry selling chiefly between $2600 and $3300 per unit.

If any cattle were buyable then cows and calves provided perhaps the best opportunity agents all agreed.

A dispersal of the Smith family herd from Avoca selling 27 Angus, with young Limousin calves at foot made $3000 per outfit while Jamie Allen, Newlyn sold 24 x 24 Angus third-calvers – calves 2-12 weeks-old – made $2880.