CATTLE numbers listed in AuctionsPlus sales on Friday contracted in response to last week’s rain, but prices generally responded favourably, along with the EYCI which hit a record 500c/kg on Thursday.

With widespread rainfall in some areas providing relief for thirsty crops and a boost to livestock buying confidence, 7737 head of cattle were listed for the week. With around 700 pulling-out due to rain restricting delivery, clearance rate was 80pc in the Eastern States sales. 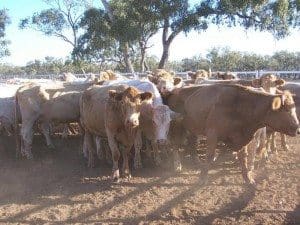 With an average across-the-board steer price on AuctionsPlus of 298c last week, the trend was following the EYCI upwards with big price jumps across all weight categories.

At the heavier end of Friday’s offering Angus and Angus cross steers weighing 353kg out of St George sold for 304c or $1075, and rising two-year-old 411kg Angus and Angus/Hereford heifers at Goondiwindi sold for $1055 or 256c.

Young breeders were also well sought-after with an average price of $1250, with young cows making $1200-$1300, and PTIC yearling heifers selling for $950 to $1580, with the top price paid for Scotts blood Angus heifers out of southern NSW in calf to Angus.

Young females with calves at foot made $940 to a top of $1570 for joined five year old Santa cows, fat score 2 and 3, with Speckle Park calves out of Hillston.