The marketing platform this week released its results from the 2021-22 financial year, with numbers of cattle again climbing to 898,747 head.

Russell Jorgenson from GDL Meandarra won the top throughput assessor while Toowoomba-based Allied Beef took out the top throughput agency. Nutrien’s Wagga Wagga branch won the award for the overall throughput of cattle and sheep. The individual agency numbers listed are not made available.

AuctionsPlus has seen a significant growth in throughput over the past five years, almost doubling its 2017 throughput of 466,656.

Allied Beef managing director James Maclean said the shortage of supply in the past three years had played into the hands of AuctionsPlus. 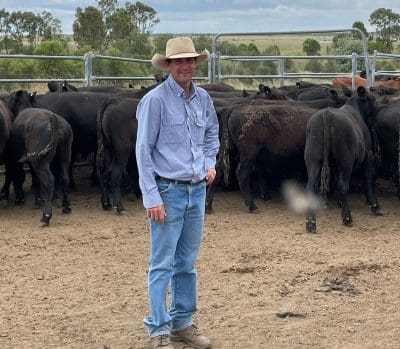 “As the markets continue to be short on supply, the online selling platform seems to put everyone on even ground,” Mr Maclean said.

“You can be buying cattle from New South Wales and the Northern Territory at the same time.”

Mr Maclean said his company had mainly been using the platform to sell backgrounder or breeder-type cattle.

“Cattle that we know are destined for certain markets with specific requirements, like feeder and slaughter markets, we tend not to use AuctionsPlus,” he said.

“However, for backgrounder and breeder cattle where the market is very broad we find AuctionsPlus very useful – because we can maintain the cattle on farm and control the sale process.”

According to the AuctionsPlus FY 2021-22 report, the company broke records this year with $3.5 billion in merchandise sales – up 49pc on the previous year.

Queensland offerings were stable on last year, at 293,589 head. The NT registered the largest percentage increases in both offering and sales for FY22, although coming off very low bases, with 5676 head offered and 3484 head sold online – up 123pc and 41pc respectively.

Another notable figure in the report was the 18pc increase in goat numbers, hitting 154,041 head.