Processor opts to sell cattle into store market, rather than holding for slaughter AUSTRALIA’S booming store cattle market got a big vote of confidence from Warrnambool-based processor the Midfield Group when its pastoral arm offered a big line of steers and in-calf cows at an annual spring store sale in Hamilton last week.

With the Victorian prime cattle market coming off by about 30-40c/kg liveweight in recent weeks, onlookers were curious why the McKenna family, owners of The Midfield Group processing operation, was selling cattle rather than killing them.

However, company director Brett McKenna said the state of the current store market favoured selling the cattle rather than running them on for slaughter. 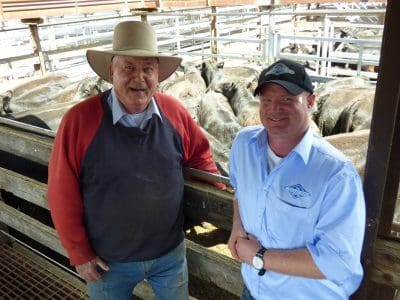 Mr McKenna said his steers sold at Hamilton averaged just under 410c/kg, with the sale picking up as the steers got lighter after the killable steers were sold.

“I couldn’t be happier to be honest. Kerr Livestock has done an excellent job drafting them up – they’ve lined up well and what we’ve spent on good bulls and cows has certainly paid off.”

Mr McKenna said the decision to sell the cattle came down to the different beef jobs the Midfield Group did, the state of season and strength of the store market.

“We do a lot of cows and we do a niche market of good product, but we’ve worked over the past 4-5 years to build up our herd of Angus and Hereford cows.

“It would be good to have a market and a brand on both sides; for the live cattle you sell and for your kill cattle, as in a Midfield brand and a pastoral brand,” he said.

“But at those prices it is extremely good for anyone selling store cattle.

“We have a few cattle around us, but coming into this time of the year when everyone has grass and the season has pushed out another month or six weeks, the economics in our case make it a lot better to sell these well-bred cattle,” he said.

“The season played a big part in our decision to sell – a lot of areas are having an exceptional season down here and all through up New South Wales – and grass gives confidence.”

Mr McKenna said margins in the meat game were currently tough, “but it goes both ways.”

“It is good to see there are more breeders make a good quid out of the job, they need to,” he said.

Many of the cattle in the Midfield lineup were bred by David McKibbin on his Hawkesdale properties Kangertong, Kangstead, Noremac and Nardoo, now owned by Colin McKenna. Mr McKibbin said the cattle lined up very well.

“It’s an unbelievable year with unbelievable prices – it was an ideal way of putting the whole agricultural side of their business on display,” he said.

Kerr and Co Livestock auctioneer Craig Pertzel said with the prime cattle market coming off in recent weeks, there were indications the store job might have been a bit tougher.

However, with some of the store cattle offered having extra weight – up about 50kg from a month ago – he was thrilled with the prices.

“It was above what I thought it would be – I was told it was 10-20c/kg above Ballarat last Friday.

Grass and confidence was behind the prices paid, he said, especially on the lighter cattle.