AFTER converting a large proportion of his cattle operations to certified organic production over the past three years, Queensland cattleman Peter Hughes is currently ignoring the Organic grassfed slaughter option and selling his steer turnoff a year earlier, as conventional feeders.

It’s symptomatic of the broader price disparity that has grown between feeder and all slaughter cattle over the past year or two.

Speaking during a beef industry gathering at Brisbane Show yesterday hosted by CBRE Agribusiness, Mr Hughes said price premiums for Certified Organic slaughter cattle had struggled to keep pace with the general rise in cattle prices since the start of 2016.

While feeder prices have softened noticeably in the past three weeks due to the rapid rise in feedgrain prices and drying conditions, flatback feeders +350kg in Queensland were still worth about 325c/kg liveweight in mid-July.

“This year, the conventional feeder market is ahead of the Organic slaughter market, so our cattle are going into the conventional beef channels as feeders, even though they are eligible for organic programs,” Mr Hughes told the Ekka audience.

“That might seem unfortunate, and a lost resource, but the only way the Organic market is going to compete is to step up on price,” he said. 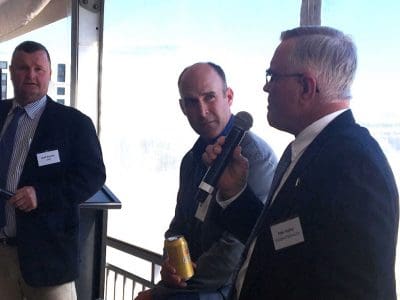 “There were bigger margins available for Organic cattle years ago, but they have now stalled. I think someone has failed. Look at the terrible mess the wool industry got into through poor marketing – I believe – and I think it is the same for any niche market.

“Organic supply chains can’t let those margins be eroded – they have to fight tooth and nail for their share. Everyone out there will be trying to erode that margin down, down – you just have to draw the line. If some other market is better than the certified organic stream, we will direct organic-eligible cattle into that channel, every time,” Mr Hughes said.

He said the surge in the broader cattle market had played a big part in the significant erosion in the Certified Organic premium over conventional cattle in the past year or so.

“Organics is finding it hard to maintain the separation, sufficient to attract potential suppliers, like us,” he said.

“The feeder market has had a tremendous influence over the past year on the direction cattle head in, across eastern Australia. It’s a different story in Western Australia, however, where they do not have a large feeder market. It’s very hollow in the west.”

“Organic supply chains can’t let those margins be eroded – they have to fight tooth and nail for their share.

In the past three years, Hughes Grazing has shifted a large portion of its cattle operations on Lake Nash, on the Barkly Tableland, and Caldervale, near Tambo in Central Queensland to certified organic production.

“The way it is at the moment, a Queensland cattle producer (conventional production, not organic) can sell his or her feeder steers for $1400 or $1500, instead of keeping them 12 months longer and sell them for $1600 or $1700 as fat bullocks,” Mr Hughes said.

“And a 400-450kg liveweight steer is a lot easier on the country than a 650kg bullock. He needs half the country, and his weightgain up to that 450kg feedlot entry weight is really smart.”

“And buyers will take the whole consignment in one hit. We can sell feeders in lots of 1000-1500, whereas with organics, consignments are much smaller – three or four decks a week, at best.”

Mr Hughes said it still made a lot of sense to adopt organic certification in parts of western Queensland, where the transition could happen ‘very simply and easily.’

“If circumstances change, and the feeder steer price advantage declines further, we’ve still got the Organic option up our sleeve,” he said.

“It won’t stay this way forever. What’s most likely is that the conventional slaughter and feeder cattle markets will decline further, while organics stays around about where it is now. That would effectively restore the premium to a point where we would again target organic programs, seasons permitting.”