THE final calf-cycle in a four-year phosphorus supplementation study has produced the most compelling evidence yet of the contribution of phosphorus support in extensive northern Australian breeding herds.

A phosphorus supplementation study has been running at the NT Department of Primary Industry and Resources Victoria River Research Station (Kidman Springs) since 2014.

Major benefits from P supplementation have been demonstrated over the previous years of the trial, but this year’s results have been even more dramatic and indicate that P supplementation is one of the most important things that cattle producers in phosphorus-deficient areas can do to improve profitability.

The effect of P deficiency on cows that raised their second calf over the 2018/19 wet season was quite confronting at the weaning muster in May this year, project leader Tim Schatz said.

The body condition of lactating cows in the untreated group (designated P-minus, or P-) had deteriorated this year to the point where the decision was made to stop the study, due to animal welfare concerns.

The poor body condition of lactating cows in the untreated group (see comparison images below) resulted also in much lower pregnancy rates than in lactating P+ treated cows, with 8pc pregnancies recorded in the P- group, and 70pc in the P+ group.

“While the study was scheduled to run for another year, it was felt that the huge differences between the treatments should be enough to convince producers of the benefits of P supplementation in extensive northern areas, and that running the study for another year would not be necessary,” Mr Schatz said.

“If cows don’t get enough P from their diet when they are lactating, they mobilise P from their bones and tissues to put into milk. This was confirmed by blood testing which found that blood P levels were adequate in calves from P- cows, but were very low in the P- cows themselves,” Mr Schatz said.

This drain of P over two lactations without P stocks being replenished by supplementation seems to have resulted in the P- treatment crashing, he said. 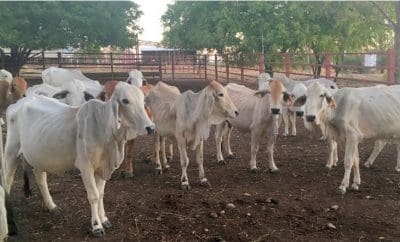 The phosphorus supplementation study at Kidman Springs began in mid-2014 when 179 Brahman weaner heifers were randomly allocated to two groups that either received P in their supplement (P+) or no supplement support (P-).  The allocation process included stratifying for weight to ensure that the average weight and weight range of both treatment groups were similar (average weight: P+ = 171.7 kg, P- = 171.2 kg).

The treatment groups grazed two similar, acutely P deficient (average Colwell P soil test results: 2.5 and 3.1 mg P/kg) neighbouring paddocks. The paddocks were set-stocked and the treatments swapped paddocks at the first round muster (in May) each year to minimise any paddock effect. The loose lick supplement was distributed to the P+ group twice-weekly and fed year-round in troughs that were sheltered from rain by sheds. The wet and dry season recipes of the supplements fed to each treatment group are shown in the table below. Basically, salt was substituted for Biofos in the P- supplement. However, limestone was added to the P- wet season supplement to make the ratio of calcium to P the same in both licks. Supplement manufacturer Ridley donated Biofos mono-calcium phosphate (MCP) fore the trial.

The heifers were first mated at two years of age for four months, from late December 2015, with the first calf crop weaned in May 2017. Two more calf crops were weaned before the study concluded at the weaning muster in May 2019.

However, this only tells part of the story, as it doesn’t account for the greater mortality rate in P- and the heavier weight of cows in P+ cattle, meaning that the P+ cows are likely to be more valuable at the time of culling for age.

“This sort of a return on investment is quite staggering and although it is not a proper economic evaluation, it indicates how great an effect that P supplementation can have on the profitability of properties in P deficient areas,” Mr Schatz said.

A proper economic evaluation of the results will be carried out in future, he said.

“Also, it is likely that the mortality rate in P- would have been even higher if the study had not been stopped in May 2019 and efforts made to improve the body condition of P- cows that had been lactating and were weak and in very poor condition.”

A group of 29 P- cows (33pc of the total group) were segregated in a small holding paddock and provided with hay, molasses, pellets and P supplement this year, until their body condition improved.

“If this had not been done then it is likely that the mortality rate in the P- group would have been even higher. Mortalities are also likely to have been higher if the study had been done with larger mobs in bigger paddocks, as occurs on commercial properties, where uneven grazing around water points means that cows have to walk further between water and pasture each day, and hence burn up more energy,” Mr Schatz said.

The Kidman Springs study has documented the large effects on productivity and profitability that providing P supplements to heifers and cows can have when they are grazing P deficient country.

The project report noted, however, that responses would vary depending on the level of P deficiency in different areas, and benefits of this scale may not be seen where P deficiency was not as severe.