“I don’t believe we will replicate that again”, said Graeme Hastings, Overdale, Korobeit near Ballan, of a line purchased from the same sale 12 months ago for an estimated $800 a head, the lead of which they sold last Friday for $2000 per head.

Reinvigorated following recent storm rains, more than a dozen orders from areas north of Dubbo through to the New England competed throughout all stages of the market, except for the heavy grown steer yarding, which was dominated by South Gippsland bullock interests.

The market for steers, in general, was viewed as fully firm on the 5200 steer offering yarded by combined agents at Ballarat the previous week.

While heifer prices were said to be $100 to $150 a head stronger than the centre’s all-agents female sale held two weeks prior.

Nutrien auctioneer Xavier Shanahan said the strong movement in heifer values was a reflection of the surge in overall market prices since the rain began falling across the north.

“That’s seems to be the way things are tracking at the moment,” Mr Shanahan said.

“There was plenty of interest shown from interstate and also from within the state where our traditional buying areas in South Gippsland and the south western areas are also experiencing a good start to their autumns”.

These were sourced for Hopkins River Beef feedlot, as was the next best-priced a yard of 615kg Angus sold account of PR Hastings, Overdale, Korobeit, near Ballan for $2000 a head

An Elders Korumburra order for heavy grown steers soaked up most of the 550-600kg steers at prices bid from $1860 to $2000. However, as the pen weights drifted back under 500kg mark feedlots including Teys Jindalee and Ramps Ridge, Ravensworth were major players along with Australian Food and Fibre, Conargo and Rangers Valley, Glen Innes, all of NSW. 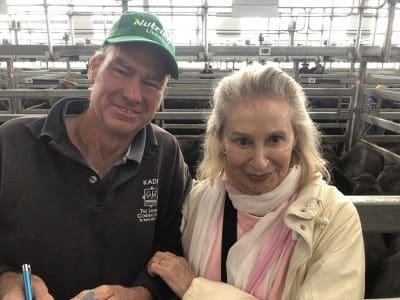 An example of these exception values was the 109 head Angus steer consignment offered by PR Hastings, Overdale, Korobeit near Ballan.

Graeme Hastings, the father of Philip (PR) Hastings, said his son was extremely happy with his result but the cost of replacing the line was a concern.

The line – Carngham Station blood and bred – he said was purchased 12 months from this same sale for the estimated cost of around the $800 a head mark.

‘I don’t believe we will replicate that again’

“I don’t believe we will replicate that again” he said.

Other significant results among the grown steer yarding included a pen of 36 Angus, 460, sold at $1980 for vendor, Braunlea. 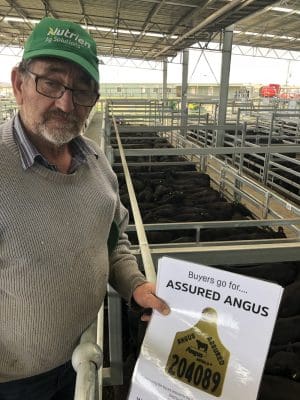 An excellent example of the 12-month price differential was the sale of the 182-head consignment of the renowned Carngham Station spring-drop Angus weaners sold from $1130 to $1320, av $1242.

As mentioned, the demand for heifers was equally as fierce with sales averaging 366c/kg with odds sale breaking 400 cents when sought as breeding purposes. 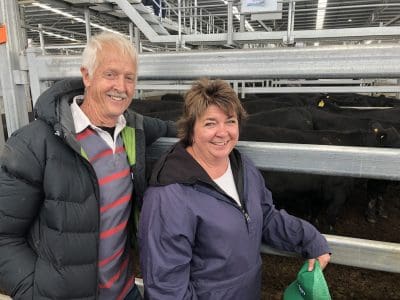 Rodney and Vicky Alexander sold Angus heifers, 404kg, at $1540 from their Buanger property.

Lot feeders from northern NSW, Victoria and South Australia were all keen for heifers to the winter supply period while a good number of local and interstate grass-finishers selected heifers as a cheaper operation compared to their higher priced steer counter-parts.