No letup in Wodonga prices as supply swells + VIDEO 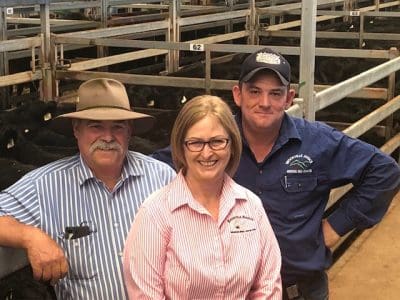 ALL classes of restocker cattle were again in high demand at Victoria’s NVLX Wodonga saleyards on Thursday when a larger than normal yarding of 2626 was penned.

Local district restockers and commission orders received from as far afield as central NSW and South Australia completed for a quality selection of mostly yearling-off steers and weaner steer calves while a rare opportunity was also provided for those interested in acquiring quality young females that stood fresh autumn-born calves at foot ready to be rejoined.

None of the above were re-joined.

Also, of note during the Elders and Paull & Scollard-Nutrien conducted sale, was several feature lines of spring-drop Angus weaners plus a larger than normal display of Hereford whitefaces which also met plenty of enthusiasm.

Auctioneer, Oliver Mason, Elders quoted the market as being fully firm on their “corporate’s” sale of the month previous.

“Prices were definitely in line with those since the commencement of autumn” Mr Mason said.

“We had a few featured lines of very well-bred calves which saw selling rates break the $6 and $7/kg mark for the lighter end but that was more so a reflection of their quality”.

“It was fairly obvious most buyers are buying to a dollar-per-head price. However, there was a definitely a premium paid for calves that were weaned: “when the buyer is paying that sought of money that job needs to be done (weaning) to get the best outcome” Mr Mason said.

Paull & Scollard Nutrien auctioneer, Luke Deimel saw the result as firm to a shade stronger for the heavier drafts of weaner steers and those suited to the feedlot.

At 460-470c/kg the feeder rate was right up to the mark with recent paddock feeder sales and although there wasn’t a lot penned the inquiry was keen, which shows the urgency for cattle to feed, Mr Deimel said.

Commenting on the young cow and calf prices Mr Deimel said he wouldn’t have been surprised if these lots had made a few hundred dollars per outfit more.

“They made what we thought but young breeding females are very scarce at the moment they could have easily made more under the circumstances.

Both auctioneers agreed the demand for Euro-cross calves and British-breed heifers suited for domestic-market feeding was extremely solid at recent rates.

At 460 to 480c/kg these lines were well supported at weights above 320kg before heading north above 500 to 570c/kg for lighter heifers and lots selected as future breeders, they said.

Watch the opening lane of steer sale streamed live on the day by Beef Central:

A second draft from each of the above all sold at expected values.

A feature line of 400 Angus steers consigned from Swifts Creek, Vic, by the Peter “Pilso”, Julie and Chris Richards, “Brookeville Angus” came in for special treatment.

Sales of white-faced steers were equivalently priced to their black steer cousins.

European breeds feature strongly in the line-up and the result.

As mentioned, heifers with breeding and weight came in for special attention.

The Nargla Downs calves were sold much earlier than normal due to the dry season throughout the Riverina, Mr Ian Grant said.