New saleyards: Staff find their feet at SELX in preparation for first sale

Staff orientation took place earlier this month at the soon-to-be opened new selling facility near Yass, NSW, built at a cost of $15 million. 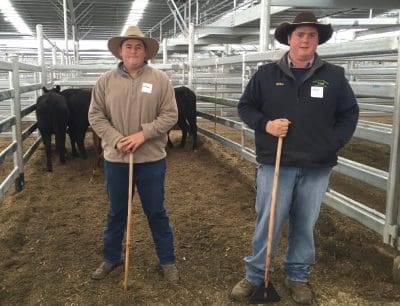 Two of the new staff, Michael and Troy, during SELX orientation in the new yards earlier this month.

Construction on the 16 hectare world-class regional livestock selling centre site commenced in September  last year, with the final touches currently being added before the first sale commences on Thursday.

SELX will provide four permanent and 20 casual employment positions, helping to increase job opportunities and prospects for local residents in the agricultural industry.

“It was a great day today meeting all the new staff, there was a real buzz in the air, everyone is very excited and looking forward to being part of this project,” said SELX manager, Rod Bourlet.

“The employment opportunities being created are fantastic, especially for the younger staff, who are just starting out and hoping for a career in the agricultural industry,” he said.

SELX director, Col Medway said the economic stimulus that the new yards would provide to the region would be “enormous.”

“Agents, buyers, sellers, carriers… they will all need somewhere to stay, somewhere to eat,  somewhere for a coffee and with the town of Yass right on the saleyards’ doorstep, the opportunities are exciting,” he said.

SELX is located at the intersection of seven highways and arterial roads, just off the Hume Highway near Yass.

First pen to be auctioned for charity

Immediately after the official opening at 8 am on Thursday, the first pen of cattle in the inaugural sale will be auctioned off for charity. Proceeds of the auction will be donated to the Country Education Foundation, Yass Branch, with the aim of supporting local students’ ambitions in the agriculture industry.

“These sale yards were a dream formed in 2008, and now we are only days away from opening them to livestock and the first ever sale,” said SELX chair, Rowena Abbey.

“The Country Education Foundation supports and encourages youth to achieve their dreams and we are thrilled to be able to support the continuing education of local residents in the agricultural industry,” she said.