Coick here to watch Live coverage video
Click below to watch post-sale interview with Elders Matt Tinkler
HEIGHTENED uncertainty over the finishing potential of the season across northern Victoria has weighed heavily on the results of the Wodonga store cattle held yesterday at NVLX Barnawartha. 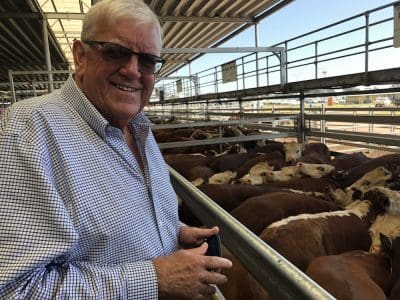 Former southern processor icon, Gary O’Connor filled in the buying duties for Ravensworth Feedlot while his son, Anthony O’Connor was on leave.

A smaller than usual following of local restocker buyers attended the 2508-head Paull & Scollard-Landmark and Elders Limited market – most of the absentee operators, no doubt, assessing the merits of turning planned cereal crops into haylage as the region dries out through a lack of subsoil moisture and hastened by a string of mid-spring frosts.

However, buying orders placed from the Western District, South Australia and Tasmania bolstered demand and were applied with greater ease than usual holding demand near firm on the steady results of this same sale conducted one month earlier. 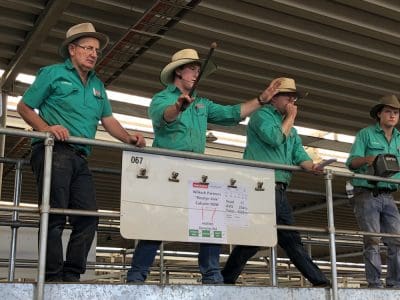 PSL Landmark auctioneer Matthew Pitzen assessed the result as “okay under the circumstances”.

The lead of our feeder steers he said sold well to the regular feeder competition, Mr Pitzen said.

“The results of these were easier on the recently cheaper feeder market while the smallish following of local restockers meant our commission buyers absorbed a lot of the larger lines but it was tough going on the smaller pens”.

In his post-sale interview (see above) Elders auctioneer Matt Tinkler agreed that the local area has begun to dry out and producers were asking questions of the season.

“This has been the case for a while now that local traders are looking for the shorter-term, heavier cattle for a quicker turn-over hence the cattle weighed at over 330kg have received the better competition”.

These were offered for the last time (property sold) by Major Ridge “Ïnglebar” Mulwala, NSW

Vendor JC & KA Cardwell, Gundowring then sold 19 Hereford steers, 450kg at $1370 or 305c/kg with all three lots secured by Ravensworth Feedlot, located to the west of Hay, NSW. 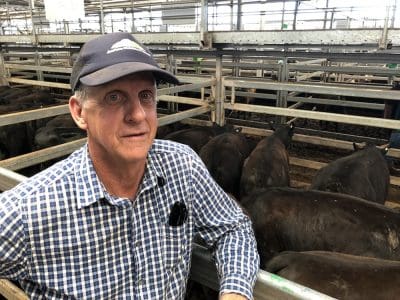 With his season cutting out Peter Lierschke sold Angus cattle from his Walla Walla property before cutting a wheat crop for hay.

The October market also offered two large feature lines through its pens- February/March-drop calves normally sold in the January sales that were weaned from their mothers and sold early.

The first was a draft of 170 Hereford and Hereford-Angus steers (153-280kg) which was sold to a top of $800/head and average $655 by Tom Coughlan and Sons, Morundah, NSW while a consignment of Tarabah Pastoral Hereford steers, Wirruna-blood (252 to 306kg) also bred at Morundah, NSW and sold from Mt Narra Narra Station, Holbrook made to $895 and averaged $771.

While the market for steers overall averaged a whisker under $3/kg the demand for heifers saw the heavy eased 20c/kg in value while the mid to lighter weights averaged firm at around 255c/kg.

The best priced in the heifer yards was a pregnancy-tested empty pen of 10 Angus, 379kg, sold at $930 a head by C Boyd and Son, Bobinawarrah while Strathvean Trading, Tarcutta, NSW sold a yard of 36 Angus, 363kg at $900. 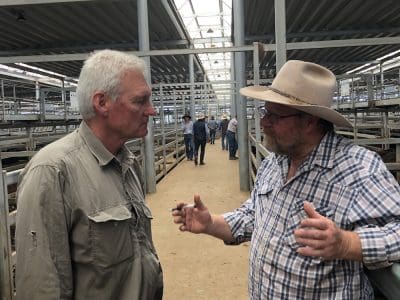 An EU-line of Hereford heifers, 306kg, made $770 while at similar weighted yard of P & A Stevenson Angus, Tallangatta Valley, 305kg made $820 selling to the same buyer.

The market for breeding females saw better demand established with a yard of 19 Wagyu heifers with 5-6-month-old Wagyu calves at foot sold at $1500 while a yard of 12 middle-aged Angus cows, with young one-month-old Angus calves, made $1390.