WEIGHT and condition remained king as store cattle numbers exploded to above 4000 head at the opening of the spring selling season at Wodonga on Thursday.

With numbers more than doubling compared to the centre’s equivalent month earlier market, and a yarding of similar size tipped again for next week, a small influx of South Gippsland buying interests added valuable support to the usual buying group that saw only a handful of pens trucked to South Australia.

“The overall trend of the market was definitely cheaper” Mr Shea said. 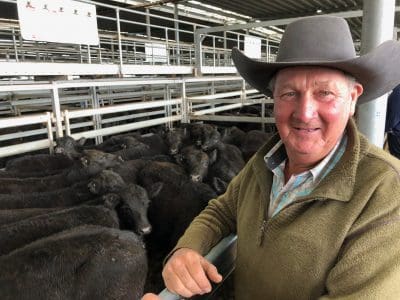 Dennis Heywood, Everton, Vic with his line of 200 bunker-trained Angus steers sold in the Wodonga sale.

It is a trend that has flowed from increased numbers being sold in the north but our quality lines of locally bred and raised cattle that had the finish and weight to suit the feeders and the Gippsland interest have continued to meet with good competition” he said.

“Local sellers are keen to move their cattle on however our season is still very much alive, with plenty of time yet for a rain in late September to have its normal impact”. 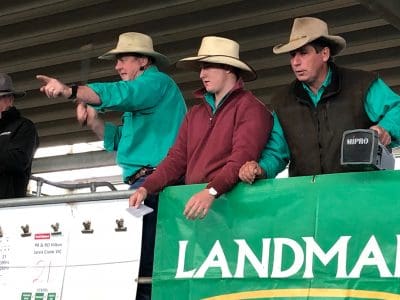 Paull & Scollard Landmark auctioneer, Matt Pitzen said the yarding was one of the largest at the Wodonga saleyards since autumn and the annual sales in January.

“However, the majority were local cattle”, Mr Pitzen said.

“It was a good quality penning. A good number were off crops and quality pasture, and plenty had the weight and finish that was attractive to our feeder buyers and the bullock finishers from South Gippsland”.

“It was a blessing to have that additional support from the south as they don’t often travel this far north” he said.

To open the sale, an increased penning of cows, mostly with August-born calves at foot, met reserved inquiry.

The market for beef-bred steers, although solid on the better presented lines, did vary considerably throughout the passage of the sale. 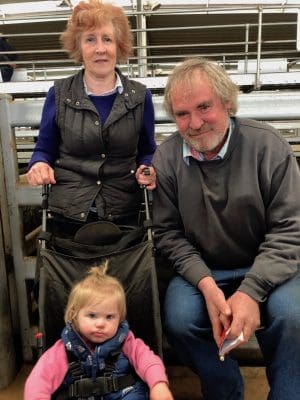 Veronica and John Yensch, of Holbrook, with their grand-daughter Chloe Smith, sold their annual draft of spring-drop Angus steers at Wodonga to make room at home for their mothers that are calving again.

While the better end of the Angus bred lots drew bids from 320 to 345c/kg, lots that did not offer the required weight, condition and/or breeding, met a market more loosely varied from 260 to 325c/kg.

Reflecting the tough conditions at Everton, Vic the annual draft of the DFK Heywood & Sons’ Witherswood, Ben Nevis and Fernhill-blood spring-drop weaners that had had all their treatments and which were bunker trained met with plenty of interest.

DFK Heywood & Sons, principal Dennis Heywood said the tough winter, with its many frosts and limited rain, had weighed heavily on the lines progress.

“They were as good as we could get them” the dedicated cattleman said. “They were heavily fed and the result could have been better but it was about where we’d anticipated”. 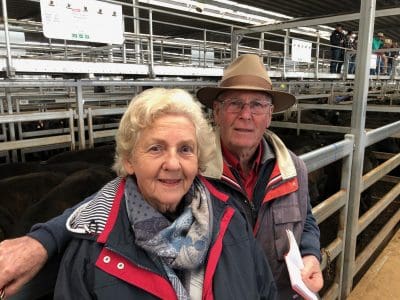 Another line of interest was the annual draft of Angus pasture-fed steers, aged 11-12 months, consigned by J, V and G Yench of Holbrook.

Mr John Yench said that he was happy with their result but nervous as the market was softer and appeared inconsistent. 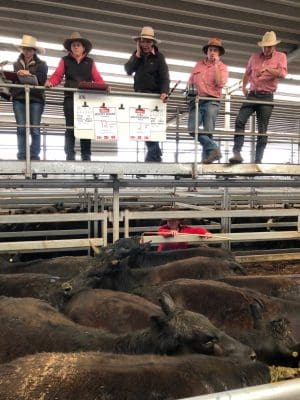 The Elders selling team in action.

Although again off -the-pace, the market for unjoined heifers varied.

Prices ranged mostly from 260 to 280c/kg although odd pens taken for breeding made more and some suspect-for-age (feeder-doubt) made less.