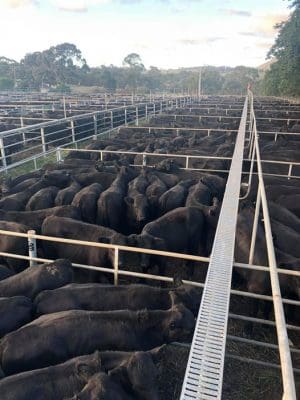 VISITORS to the opening mountain calf sales this morning have witnessed “probably one of the dearest sales that has ever been seen in this part of the country”, according to market analyst Murray Arnel.

Now in its 84th year, the annual East Gippsland calf sales draw large crowds as people flock to the mountain yards for the enjoyment, the atmosphere and the nostalgia, and today today they were treated to a little bit of history as well as new price levels were reached.

This morning’s sales comprised 1100 mainly Hereford cattle yarded by Sharpe Fullgrabe sale at Hinnomunjie and close to 1600 black and black baldies penned by Elders at Omeo.

Click below to watch livestream of opening pens at the Elders sale:

Calves in the low 200kg range in the predominantly weaner fixture pushed as high as the 700-750c/kg mark.