SPIRALLING store cattle values sold at Ballarat on Friday kept pace with the beef industry’s surging Eastern Young Cattle Indicator that broke through the 900c/kg barrier earlier in the week.

Following on from a full-house Mortlake 6000-head store cattle clearance on the previous day, the rise in Ballarat prices was not unevenly distributed as heavy steers made up significant ground on lighter feeder steer sales which in turn were mostly unchanged on the centre’s previous 4400-head March market.

Heavy heifers were mostly firm and to a shade easier in places on the previous month’s market whereas all categories of younger weaners, and in particular heifer weaners, were also significantly marked higher fueled by grass-driven restocker buying. 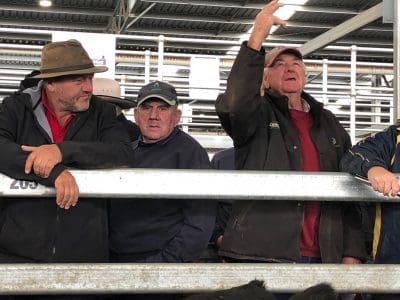 Auctioneer James Haddrick, HF Richardson confirmed while competition was stronger across the board, not all classes were dearer.

“Although we’ve been saying it for some months that these classes were have never dearer, the support especially for the lighter weaner was enormous with local buying and orders from the northeast, southwest and Mallee regions of Victoria competing with several NSW-placed orders.

Jamie McConachy, Charles Stewart & Co, said another interesting aspect of the sale was the appetite of the feedlot demand that saw almost any steers and heifers suited to feed trucked to numerous destinations across Victoria, South Australia and NSW.

Surprisingly there was no attendance from the east of Melbourne, in particular South Gippsland who normally support and buy a good number of the heavy steers from this market, Mr McConachy said.

All of the grown cattle, including the heavier steers over 550kg and up to 650kg were taken by the feedlots, and at the increased prices, he said.

“There were no complaints from my end but I wasn’t buying,” Mr Nicholson said. 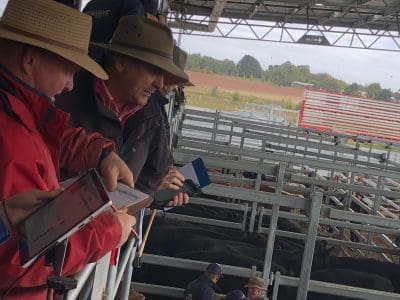 The Elder team of Auctioneer Graeme Nicholson and Bernard Shanahan, booking, during the closing stages of the sale.

He assessed that heavy steer values were a least 20c/kg dearer and possibly more while feeder steers and heavy heifers were only firm: “the latter possibly being a shade easier”.

However, Mr Nicholson added that the demand for heifers quickly escalated to extraordinarily levels once weight dropped to below under 400kg to the point where some heifers at 230-240kg made more per kilogram than steers of the same weight from the same consignment.

It was ‘a most extraordinary sale’, Mr Nicholson added. 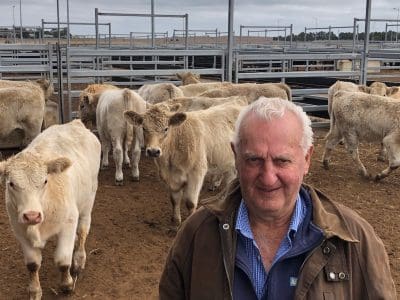 The next two yards sold account Trident, each contained 22 Angus that weighed 610kg and 572kg respectively. These made $2520 and $2370 per head and were booked to complete an interstate order placed by Nutrien Tamworth, NSW.

Watch the opening lane of sales streamed live on the day by Beef Central:

Sales of the heavier weaner steers were also greeted with the same enthusiasm by the various feeder orders.

As the weights declined rates more consistently traded above the $5/kg level.

For breeds other than Angus competition remained keen at slight lower rates. 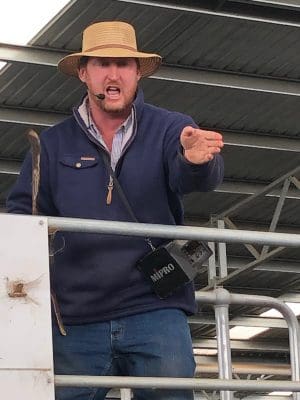 Through the weaner run an opening bid of at least $1600 was required in order to purchase all well- bred pens offering weights of 250kg or better while those lighter made upwards of $1450.

As mentioned, the demand for the lighter weaner heifers was shifted to a higher gear with the majority sold above $5 to $5.80/kg with odd sales of fresh-conditioned, well-bred, spring-drop heifers lifted about $6/kg, topping at $6.90c/kg.

This latter example was a pen of 24 V&C Goy Charolais-Angus, 234kg, that made $1600 and were secured by a local domestic lot feeder.