Always a jovial person the grin of expectation on Dennis Heywood of Everton even before the sale at Wangaratta said it all… he knew he was in for a beauty and the results were delivered in spades.

AFTER two preceding sales in the Wodonga weaner sales series, competition and prices bubbled over at an inaugural Wangaratta event on Wednesday underpinned by an eager northern contingent scrambling for numbers.

As one traveling buyer remarked “we don’t know whether these cattle are dear or cheap, we just know what they cost and it’s fearful”.

And another said, “… ät these prices we’re going home with only about one-tenth of numbers we want”.

While a large interstate contingent trucked a large portion of this inaugural yarding to destinations as far as Tamworth and North Star in NSW and Texas and Dalby in southern Qld, a number of defiant locals defended their patch as many also other walked away in disbelief.

Selling agents however suggested the result was very pleasing for everyone. 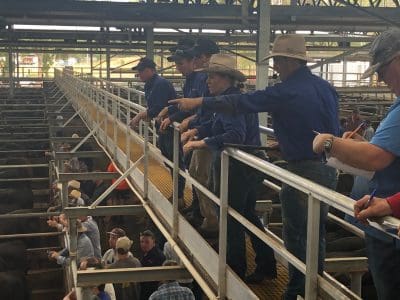 The Corcoran Parker selling team with auctioneer Justin Keane in charge went about their business.

Corcoran Parker principal Kevin Corcoran said that top end prices were about where they thought in cents per kilogram term while the middle draft pushed the high end of expectations.

“Ï think in reflection those who have bought their cattle would be relieved they have got some but plenty have gone home with only a portion or none and are at a loss where they might go to get their needs.”.

CP auctioneer Justin Keane said that it was most unusual to find, in any saleyard setting, that half of a 3000 head penning could be attributed to only four or five major vendors.

“We were able to do this here today and it allowed those wanting big numbers and large drafts to apply their craft and this was the major strength behind this market’s underlying demand.

“I think it’s been a great boost for the buyers they can have confidence in these cattle”.

Opening the sale an amazing pen of Stephen Clark’s Deepdale Angus steers, 459kg, from Tallarook rang the bell as the highest priced pen of this northeast sale series topping at $2250. With not a calf a day over 10 months of age, this Witherswood and Rigo-blood yard was snapped up by the McKenzie family feedlot at Bunnaloo along with a second pen 425kh that made $2060.

Watch the opening lane of sale at Wangaratta: In the heifer section weight was not overly abundant with only a handful weighed over 350kg.

These best of these were sold in the 450-465c/kg however those offering lighter weights drove buyers into frenzy with plenty drawing bids equal to 480 to 530c/kg.

Interfaced through Auctions Plus, the online platform was well utilized with 284 registered user, 10 active bidders placing 158 bids and making $14 purchases.

The online interest spanned a wide area with heavy coverage into central and northern NSW and broadly across Victoria, an Auctions Plus source indicated.