Competing for a quality yarding of 2295, restockers from across a broad area of Western Victoria held court in the majority of the bidding duals ably supported by a keen following of buyers from South and West Gippsland and the southeast of South Australia.

“We were hoping for a steer average of around the 310 to 320 cents a kilogram mark and I believe we’ve beaten that especially on our lead drafts where, in some instances, rates of 350c/kg were achieved” Mr Pertzel said. 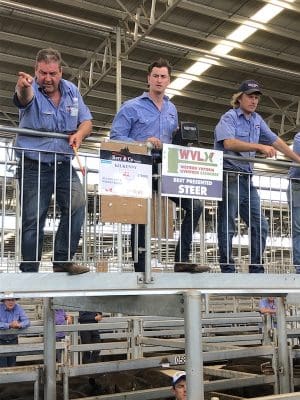 The Kerr & Co team with auctioneer Craig Pertzel in control.

“However, you must remember that the best calves in this yarding are the cream of the Western District’s spring crop and are the equal to any of the autumn-born calves sold in our feature January calf sales” he said.

Mr Pertzel said that for various reason there were fewer numbers penned of the heavier-end 18 to 20-month-old Angus steers.

Some of these he said had been sold early as stores due to the tough autumn. Others had retained for bullocks due to the exceptional spring growth on some properties and others were being held over making up cow numbers sold off during the dry start to winter.

That being the case, only a small handful of the regular feeder orders appeared remotely interested to secure large numbers. Among the more prominent buyers was Prince Royal Station Feedlot, Peterborough, SA who was a repeat buyer of the Greenhills, Minhamite, Murray Grey steers that offered EU-accreditation. 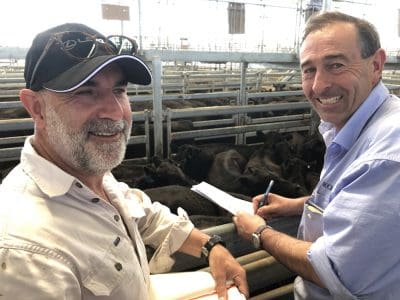 It was the fifth time in as many years that David and Robyn Roache’s Coolana-blood Kilkenny steers from Hawkesdale have been awarded the David Powling Memorial shield as the best presented in this annual fixture.

A second pen of 62 Kilkenny Angus steers, 395kg made 335kg or $1322 with both lots secured by the Elders Pakenham branch.

As the weights drifted lower bidding on noted pens to crept higher with a yard of 62 Pardoo Cattle Co Angus, 350kg made 346/kg on a bid placed by Geelong agency HF Richardson while at 352c/kg a yard of 23 Murroa East Angus, 349kg was sold to Kerr & Co, Hamilton.

And to conclude the 68-lot steer sale a number of pens were offered unweighed. These included a feature line of Ardonachie Angus steers that made to $1100 which were estimated at 270-280kg while a second pen of 30 Ardonachie Angus made $890 on an estimated weight of 240-245kg. 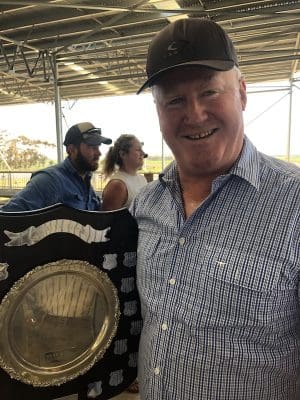 Increased by an average of four to six cents a kilogram, bidding for heifers was edged higher into the 270 to 285-cent price range with a top of $3.06/kg paid for Angus heifers to returned to the paddock for breeding purposes.

A small selection of cows, with calves at foot, were sold $1660.

A single yard of nine Angus heifers, pregnancy tested in calf for a March calving made $1300 to conclude the sale. Ken and Barb Satchell, sold the last of their Grosvenor Angus breeding herd to focus on sheep and lambing with their son, Tim and his wife Felicity at Condah, south of Hamilton. 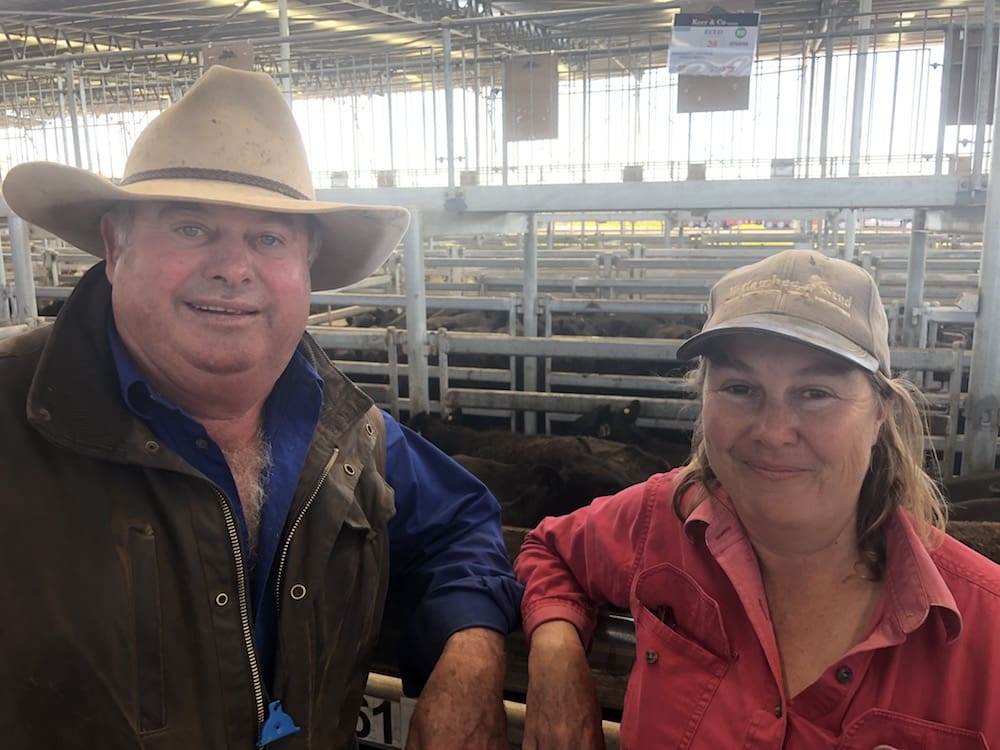