(SCROLL DOWN FOR VIDEOS AND FULL WRITTEN REPORT AND PICTURES)

VIDEO: Murray Arnel’s livestream of the August 1 Wodonga Store sale, courtesy of Shanahans Livestock Transport based in Albury/Wodonga and Toowoomba: 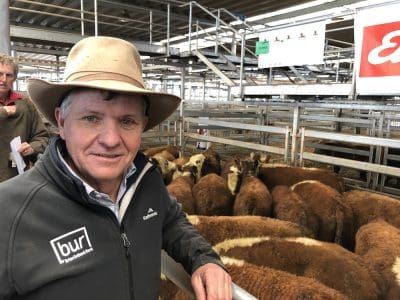 ALTHOUGH stronger than the results of one month ago, competition at Wodonga’s August 1 store cattle market was somewhat subdued on the centre’s most recent sales held during late July.

Offering an improved quality of 1960, officiating agents Elders Rural Services and Paull & Scollard- Landmark conceded that the less than ideal forecast of further below average rainfall tipped for the upcoming spring had dented the confidence of the longer-term cattle investor.

“Most intending buyers now had the mind to be in-and-out”” of their cattle trades before year’s ends”said Matt Tinkler of Elders.

“The season within 100 kilometers radius of us here at Wodonga is reasonably well set-up for this time of the year. Locally it’s possibly one of the better starts for some years but with fodder reserves low and plenty of properties still requiring run-off to fill dams, confidence has become stayed” he said. 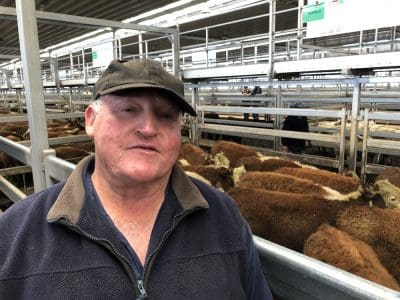 Changing over to beef production was former Upper Murray dairyman, Ian Jones, Huon, Vic. He paid $650 a head for these Poll Hereford steers that was part of the Tarabah draft.

P&S Landmark’s Matt Pitzen agreed and said it was a surprise demand wasn’t as strong given the set-up of the season and continued strength of the slaughter and feeder demand.

“Markets has softened and you can feel the pessimism beginning as a result” he said.

“But we offered a good quality yarding and the competition for the steers especially was consistent across the board” he said. 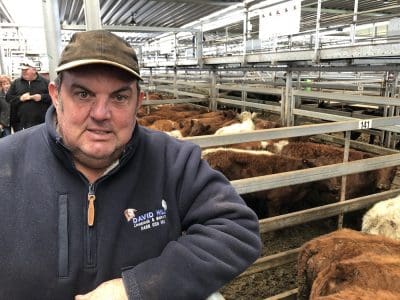 The demand for heifers he said was selective and rates varied broadly according to weight, condition and breeding he said.

The yearling-off and weaner section of the penning contain a number of drafts presented off crops in forward to near-prime condition that due the keen interest of multiple feeder orders.

Feed yards at Macarthur, Vic, and Balranald and Bunnaloo, NSW were among the most active buyers on the day punching bids on Angus feeder steers out to 335c/kg for weights ranging from 330 to 375kg.

Among these sales, Indigo Valley vendor, Lou Pendergast offered and sold, at $1210, a yard of 17 Angus steers weighed at 347kg. 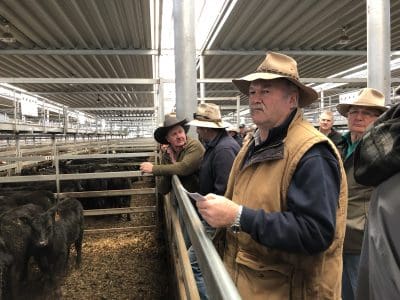 Buying for various orders including the Bunnaloo Feedlort, Bunnaloo, NSW was Geoff Brawn of Holbrook, NSW.

As the weights receded local restockers edged their bids higher, with the best nudging 350 to 358c/kg.

At this lighter end of the weights Indian Creek, Tumorama, NSW sold 260kg Angus, offering EU-accreditation, at $870. A pen of C & A Browne, Myrtleford, yard of Alpine Angus-blood steers, 266kg, made similar money, selling at $890 a head.

One of the feature lines offered on the day was a draft of 170 Poll Hereford steers, Wirruna-blood offered by Michael and Anna Coughlan, Mt Narra Narra Station, Holbrook.

A further feature entry included a line of 108 Shorthorn steers offered by Upper Wantagong Station, Holbrook, NSW, whereby the tops and seconds, at 252kg and 241kg respectively, each made $740.

Brendan Gray, with wife Leckie, of Mulwala recycled Angus heifers they purchased six months ago from the Hay, NSW district. The line, which was grassfed, weighed to 356kg and made to $990.

Heifer sales were principally conducted at the lower rates of 265 to 285c/kg, with only odd isolated sales higher.

Topping the heifer sale with a yard of commercially bred Texas Angus-blood females was Gillian Leeds, “Broome” Jerilderie, NSW. Her yard of 17, which had EU-accreditation, weighed 377kg and made $1080 a head.

One of the few highlights for the day was the increased interest in a short display of breeding stock whereby a tops-of-the-drop line of PTIC Angus heifers, to commence calving in August, made to $1760.

These were a yard of 21 offered by Paul Hoffman, Three Creeks, Culcairn, NSW while a small pen of five second-calf Shorthorn cows, 660kg, PTIC to Shorthorn bulls, calving November-December made $1780.