The Elders selling team with auctioneer Joe Allen in control.

IN spite of nationwide drift in slaughter cattle prices over the past fortnight the market for Victoria’s rapidly maturing crop autumn-drop weaners traded bravely at Euroa on Wednesday.

Averaging $1630 a head and 475c/kg across its 1900 head all-black weaner steer yarding, the market was keenly contested by a modest following of local Northeast, Goulburn and Murray region restocker-agents along with several larger interstate feeder and backgrounder orders held by commission buyer representatives.

Across the weaner selection weights and quality were up but the numbers offered in this year’s fixture were some 500 head fewer than this same sale 12 months ago.

However, the result – deemed last year as being underwhelming- met the full expectation of all sellers averaging roughly a $600 a head or 140 cent a kilogram more than the year earlier sale. 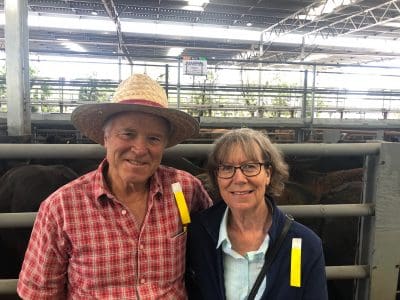 Speaking on behalf of the selling agents, Elders, Nutrien and Rodwells all of Euroa, duty agent Michael Curtis, Rodwells, said the result of weaner clearance was quite extraordinary.

“If you came to buy steers the weights and prices were very tightly managed,” he said.

“You needed at least $1640, and up to $1820 to buy a majority of the cattle yarded that weighed mainly between 320 and 440 kilograms. As a consequence, there were very few pens of lighter steers offered, most of these were retained because of the abundant feed still left in the paddock”, he said.

However, Mr Curtis conceded a grown steer offering of about 300 head, which commenced the market, left many wondering what was to follow further back in the yarding.

These fully reflected the cheaper trend of the previous week’s slaughter market albeit prices were deemed as satisfactory, Mr Curtis said.

That part of the sale Mr Curtis said was a bit disappointing when two weeks ago similar cattle would have made $4/kg or better.

One of the sale’s leading buyers, who came to purchase one load but accumulated three, Chris Stanley buying for Glen Innes, NSW lot feeder, Rangers Valley, said the three main principals required by the feedlot were met.

“The weight, the genetics and importantly the price were all to their liking so we got more than was intended which is okay in an operation of its size, he said.

Pride of place in the steer weaner yarding was a pen of 19 Welcome Swallow-blood Angus offered by Marg King, Balmattum.

Weighed at 443kg these were sold at $1820 to an Andrew Lowe commission-order while IL Dickson, Longwood sold 13 Connemara-blood Angus, 440kg at $1870 to racing identity and Kilmore home-feeder Simon O’Donnell. 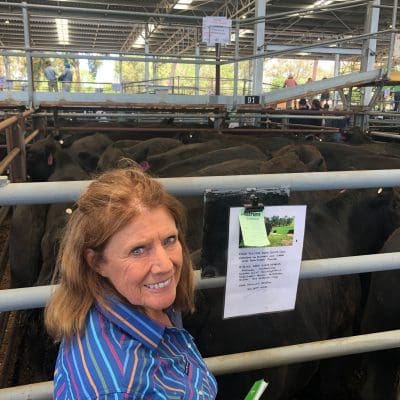 HIGHEST BY FAR: Long-time vendor and regular seller at Euroa, Leone Ryan, Pyalong was overjoyed with her sales of Merridale and Weemalah-blood Angus weaners that made to $1670/head.

Neither of these lots retained their EU-connection.

Watch the opening lane of sales conducted in the weaner section

Hopkins River feedlot and agent orders from Warragul and Pakenham in Victoria south also added to the competition and secured multiple pens from the weaner selection.