No one complained about the rain during Elders’ Omeo calf sales. After successive years of drought the numbers penned were about half the usual volumes. Many were sold early due to the continual dry, and recent fires.

DROUGHT and bushfires where behind a heavily reduced supply of Angus and Hereford cattle at the 80th annual Elders Mountain Calf sales, held on Tuesday and Wednesday.

Elders sold a total of 4649 head with 1919 Angus and Hereford/Angus steers and heifers sold Tuesday.

These sales generally offer cattle of an age from 6-16 months, being early autumn to late spring drop calves.

While there is no weigh bridge at the sales, estimates put liveweight prices between 408c & 515 cents per kilogram for most sales.

Tuesday’s sale, and the two Hereford sales of Benambra and Omeo on Wednesday, all sold to very strong demand with close to 50 percent going to New South Wales and South Australia.

Feedlot buyers, and backgrounders for future grain feeding made up a large portion of the buyers.

The highlight of the two days was the sale of the top pen of Shorthorn/Hereford heifers, which made $1810 for A&B AhSam, Omeo.

These “Strawberry Roan” heifers were purchased for breeding.

A highlight of Tuesday’s heifer sale was the 412 Hereford/Shorthorn heifers of F&D Boulton.
Frank and Dawn lost around 4000 acres in the recent bushfires at Gelantipy and Wulgulmerang, after the extended drought.

Top of the black heifers was Meringo Pastoral Co, selling 37 Hereford/Angus yearling heifers for $1500, which were purchased for grain feeding near Gunnedah, NSW.

Overall, the two days of sales produced excellent results all round, with most cattle being $400 to $600 higher than the 2019 sales. 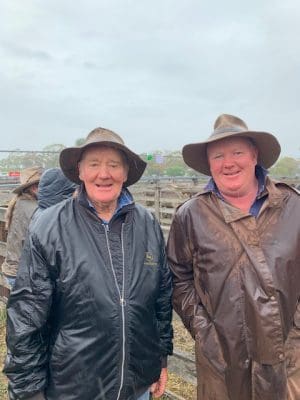 Bill and Michael Batty, Swifts Creek, were very happy on two fronts. Their Hereford steers sold from $1390-$1480 at Omeo, and it was raining, giving some hope to an early autumn break. 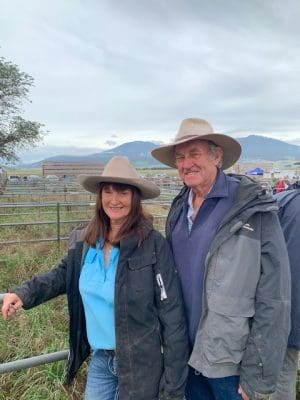 Clive and Di Anderson, Benambra, are regular sellers at the Elders annual Mountain Calf Sales. This year they sold only a small number of younger calves, deciding to hold onto their older steers and heifers. 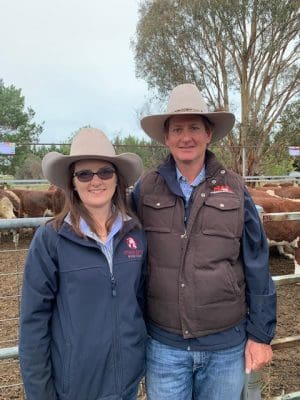 Peter and Deanne Sykes, Mawarra Genetics, Longford, were at the annual Elders Mountain Calf sales to give support to their clients. Mawarra Genetics are a powerful force in genetics, especially in greater Gippsland.