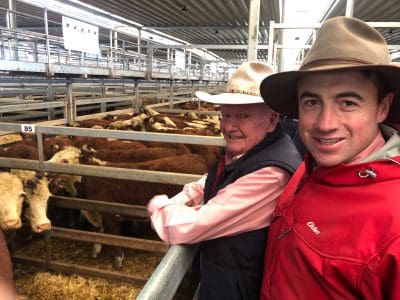 Topped up by occasional online bidding, an increased number of secondary-quality were not as well-supported, selling $50 to $100 a head lower than the centre’s month earlier Elders and Nutrien conducted sale.

Nutrien auctioneer Will Jennings called the overall result as satisfactory.

Most of the secondary lots he said were clean-up lots from the autumn drop while most of the spring-drop pens were penned in fresh condition but didn’t offer a lot of weight.

Oliver Mason, Elders said that given the recent deterioration in the local season local support was satisfactory but slimmer than normal.

“We felt the market was softer overall”, Mr Mason said.

“The good runs of spring-drop calves made their rate but there wasn’t a lot of weight involved with these and this prevented some of the feedlot orders from operating”.

An example of this was a draft of Ensay-bred Poll Hereford steers, 412kg, that black steer money or better.

As the weights declined further the per-kilogram rate of sales edged higher reaching $7/kg at about 300kg.

Unjoined heifer sales were mostly contested by local feeder and restocker interests including a regular order placed from South Australia. 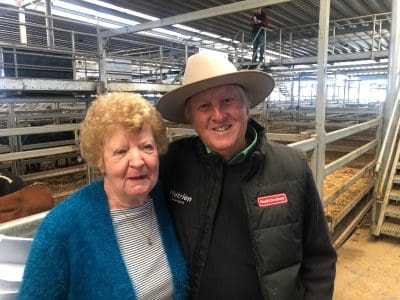 Sales of breeding cows, with calves at foot, met demand fitting of age and quality. 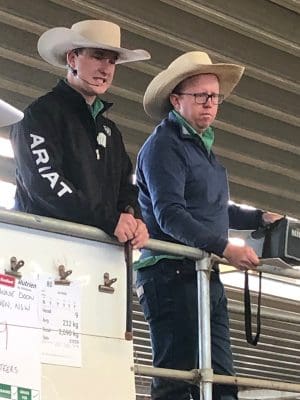 These were offered by GT Hoffman while three yards (46 in total) of Tom Groggin Station, Corryong Angus cows, Alpine-blood, PTIC to Alpine Angus bulls made $1800 to $2160.

Presented in light store condition with weights from 472 to 547kg, the Tom Groggin Station cows returned a sale rate between 367 and 441c/kg.