Markets: Should southern states vendors hold on to weaners to sell as feeders?

IN the current market, should southern states vendors try to hold on to weaners to sell at feeder weights?

It has long been an industry convention that a c/kg premium is received for weaner cattle, when compared to feeders.

The premium can typically be attributed to a range of factors including weight, greater volume, more marketing opportunities from a greater pool of buyers and a larger geographical area.

Combined with management processes and land area limitations, many southern producers tend to sell earlier, rather than holding onto weaners to take through to heavier weights. However, the current drought conditions have seen a shift in this premium throughout 2019 towards feeder stock.

To look at the potential premium producers can currently gain from holding on to stock to reach feeder weights, the AuctionsPlus Market Insights team has completed an analysis on data from 2013 to 2019.

At a c/kg level, the premiums received have fluctuated over the years depending on supply and season. However, over the past seven years, feeder cattle have rarely outsold weaners. On average, between 2013 and 2018, weaners traded 11c/kg higher than feeders. However in 2019, we have witnessed a considerable shift in the market in favour of feeders, resulting in a 18c/kg premium for feeders over weaners during the first eight months of the year (see graph below).

2013 to present comparison of weaner vs feeder prices, expressed in $/head, and the correlating c/kg price difference between weaners and feeders during this time period.

The second graph below highlights the historical throughput of weaners versus feeders sold online.

A significant drop in the supply of feeder stock can be seen throughout the first six months of 2019.  This is a result of the deteriorating season creating supply pressures, resulting in comparably increased returns.

Throughout the year, tight supply has resulted in fierce competition for available feeder stock, particularly for those higher quality lines. In May, a line of 410kg Angus steers offered by Glen Collin Pastoral Co, Walcha, NSW, attracted competition from eight unique bidders from two states, eventually selling for 378c/kg, or $1550/head.

To put this price differential for 2019 into perspective, based on this year’s average market conditions, a 280kg animal would trade for $767/head, while a 120kg heavier feeder, weighing 400kg, would return $1187/head (see third graph below).

While not all producers are in the position to hold on to their weaners to reach feeder weights in the current seasonal conditions, those that have been able to do this in 2019 have certainly been rewarded.

Although typically there is less risk involved with selling weaners, and traditionally a stronger c/kg return, in the current market, if producers have the time, money and the ability to hold stock for a further three to six months, there is considerable income to be made.

However it must be noted that there are numerous variables affecting the time and costs involved with bringing an animal to feed weight, and thus producers must make decisions based on their own individual operations, geographical location and seasonal circumstances. 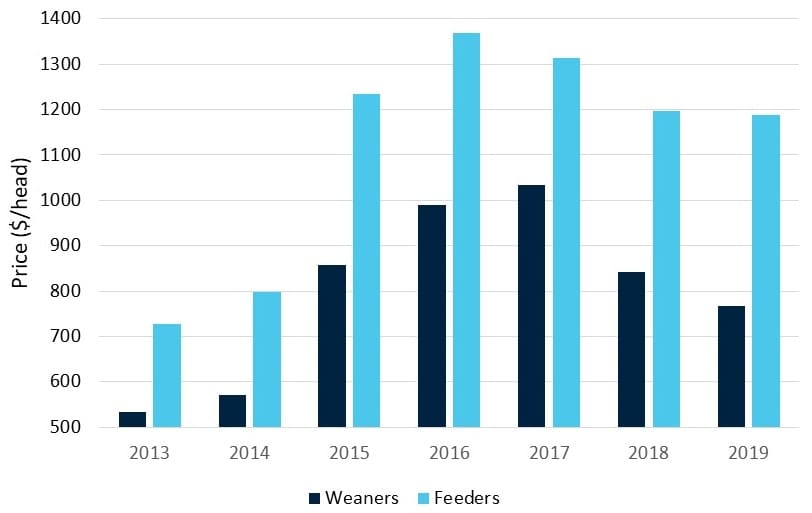 Price comparison of the $/head value of a 280kg weaner vs a 400kg feeder over time. Source: AuctionsPlus