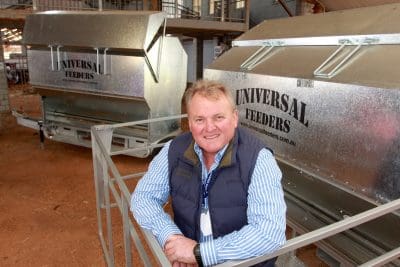 Ross Walker with mobile Universal Feeder saliva-lick feeders at his display at the Queensland Beef Expo in Toowoomba.

More “grain assisted” cattle are flowing onto cattle markets around the country as low grain prices and high cattle prices encourage greater numbers of producers to feed grain out in paddocks.

Every extra kilogram of weight added to cattle is worth about $3.50 on the current market, which is seeing more stored grain pushed through cattle feeders as a way to add value, and helping producers to turn off cattle earlier, while also freeing up grass sooner.

Mr Bird says he has never seen the amount of grain-assisting of cattle that is occurring right now.

“The grain price is definitely affecting it,” Mr Bird said.

“The big thing around here is that a lot of those cattle would normally go onto oats.

“However, we haven’t had an oats crop this year, or the oats has been very late, and is only just getting fed now.”

Typically producers were using a light ration in paddock feeders to pre-condition weaned steers and empty heifers for about 40 days to feedlot-entry condition or further to local trade weights.

The same market dynamics are also likely to see country usually sown to grain sorghum planted to forage instead on the Darling Downs this summer, Mr Bird predicts.

“Already clients have been asking the question and trying to do figures on buying cattle and keep them going on forage sorghum,” he said.

“They can’t do the maths with grain sorghum.”

In New South Wales, Dubbo-based NLRS reporter and veteran stock agent David Monk said there had been a general trend for a number of years towards finishing cattle with the assistance of grain, providing a faster and better result. 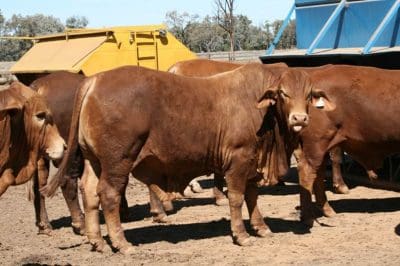 However, at the moment a lot more people were supplementary feeding due to the low grain prices, and many were value adding their own grain, Mr Monk said.

With barley at Nyngan being quoted at around $125/tonne plus cartage, it was a cost-effective way to feed on the current market.

Ross Walker from Dalby sells Universal Feeder saliva lick feeding units in Queensland and says he has fielded strong interest from all over the State in recent months.

Units have sold to pastoral companies in the Queensland Gulf and grazing operations in the mulga country of south west Queensland.

However cost-effective solutions are being found as graziers buy second-hand equipment such as field chaser bins or groupers to store purchased grain. In some cases neighbours are also splitting road train loads of stock feed between them to share the costs.

Mr Walker said a number of customers were buying the feeders for long-term production feeding, not simply to take advantage of the current market dynamic of high cattle prices and low grain prices.

They were giving weaners access to grain straight off their mothers, the most efficient time to add weight, and accelerating their turn off at an earlier age, which in effect was reducing stocking pressure, freeing up grass and setting paddocks up for the next 12 months ahead.

Another factor was the modest size of premiums for grainfed cattle over grassfed in the current market. Export processor grids this week show a 10c/kg dressed weight incentive for grainfed slaughter cattle – about as narrow as it gets in the yearly cycle.