PTIC heifers averaged $1610 and sold to a top of $1820 for this line of Booroomooka blood Angus heifers from Bingara NSW. The heifers 446kg at 16-17 months were PTIC to Angus bulls.

LARGE lines of cattle from very dry areas of eastern Australia continued to feature on AuctionsPlus this week. Listings eased a little to total 9374 head across three commercial sales, but still noticeably higher than earlier volumes.

A decrease in clearance rates was seen this week, reflecting the dry conditions across most states. Despite a lower clearance overall, most prices remained reasonably firm, with the exception of heavier heifers and lightest steer categories, which tended to decline.

Joined females this week produced an offering of 2309 head, with the biggest proportion out of NSW.

Proven breeders this week averaged $1287 and sold to a top of $1725 for a line of 47 Angus cows & calves, account Betrola Investments, Coolah, NSW. Averaging 554kg at 3-4 years, they were PTIC to Angus bulls.

Out of Queensland, a line of 99 Droughtmaster cows & calves, re-joined to Santa bulls, from Barcaldine made $1240.

Looking to WA, cattle numbers fell slightly this week. Despite the drop in numbers a 100pc clearance was achieved, reaching a top price of $1970 and an average of $1608. The top price went to a line of Simmental/Angus steers & heifers from Balingup, weighing 776kg.

Another highlight from WA was a neat line of mixed sex Angus yearlings from Northcliffe, weighing 520kg and selling for $1414 or 525c/kg. 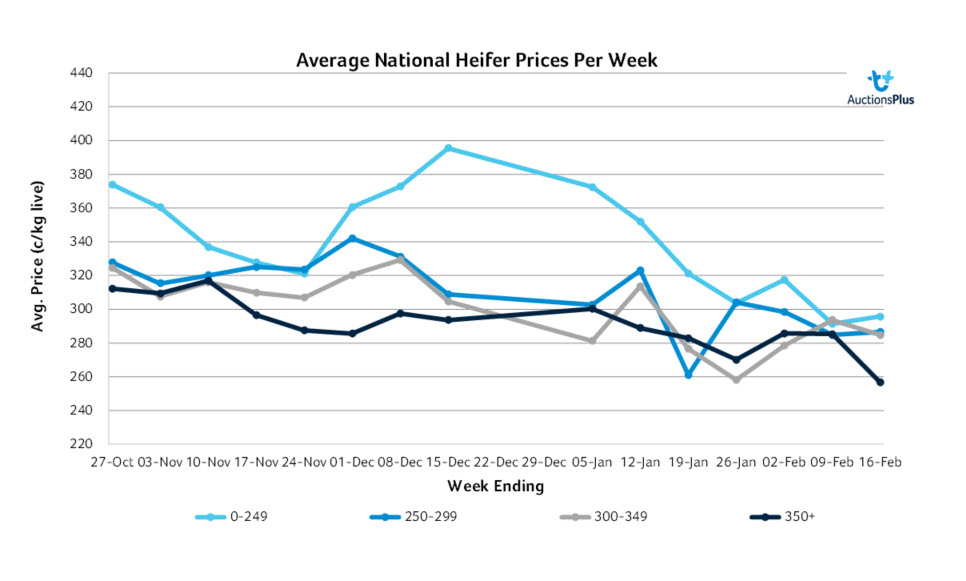 Western Australian Wagyu breeder Irongate Nominees is trialling the tender system in a big offering of 1000 F1 Wagyu x Angus weaners being marketed on AuctionsPlus over the week.

The tender opened this week, and concludes on 23 February. At the close, the vendor receives all the conforming tender offers lodged with AuctionsPlus, and makes a decision.

Volume is obviously a key sale feature in the offering, as is the desirable performance genetics involved in the Irongate cattle. The steers and heifers, offered in a single line, range in age from 10-15 months, 311kg average. Cattle are ideal for the feedlot placement, and the female portion would make future breeders for F2 programs. Cattle are all bred out of high marble score/TCI Irongate bulls and are out of quality Angus cows.

Individuals lodging a tender must be registerd AuctionsPlus users.

The sale is part of an annual weaner turnoff from Peter Gilmour’s Irongate Wagyu.