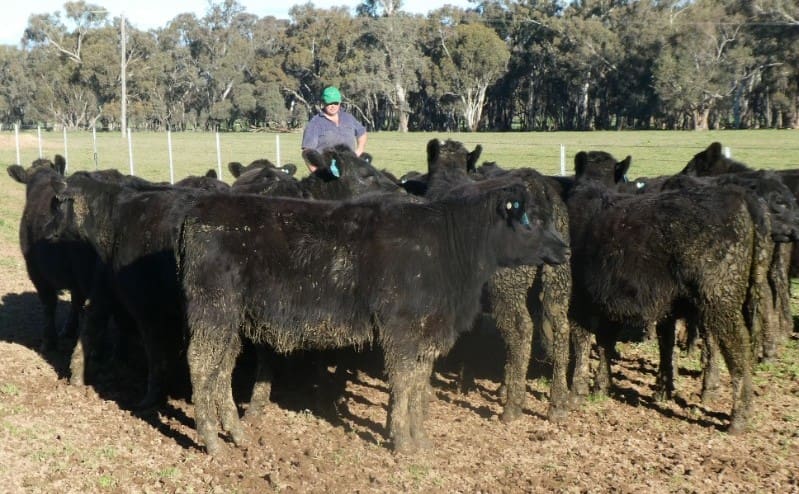 LIGHTER steer and heifer categories showed a rising trend in AuctionsPlus online trading this week, which put a larger offering of 12,000 head in front of bidders.

Clearance rates were up on last week, with a 14pc increase to total 87pc overall.

In the cow and calf market prices ranging from $1680 to $3310, averaging $2489. Top price went to a line of 2-3 year old NSM Angus heifers with Limousin-sired calves at foot, offered by Robert Arcuri, from Rossmore in NSW.

Another standout cow & calf offering was a line of Santa station-mated cows and calves from Champion Livestock, Longreach, QLD. These 2.5-3.5 year olds sold for $2560 and will be making the 1300km journey south to a property near Trangie, NSW.

A line of standout Hereford PTIC breeders, PTIC to Angus and Simmental bulls, from Condamine in southern QLD made $2125, and will head 1000km south to the Blue Mountains in NSW.

PTIC heifers ranged from $1200 to $2320 this week to average $1840, with the top price hailing from Mulloon Creek Natural Farms in the Monaro, NSW for a line of two-year-old Angus heifers. These girls were PTIC to Angus bulls.

A line of PTIC Angus heifers from Mywurlie Pastoral Co, Hay, NSW made $1840. These heifers are heading further west to Broken Hill, NSW which looks to be having a bumper season; here they will drop their Angus calves in the Autumn.

Among young cattle, heifers less than 200kg made a top of 527c/kg or $830. These were 5-8 month old Angus heifers listed by Eurimbla Partnership, Gilgandra, NSW.

Heifers 280-330kg made a top of 448c listed from GW AC Hare from Moulamein, NSW. These Angus heifers were 10-11 months are heading south to Victoria to enjoy the rest of Winter.

Another notable mention was for four lines of performance-registered NSM future breeders from Rennylea Angus, Culcairn, which saw some outstanding prices. The 10-12 month old heifers made a top price of $2040 for one line, with the other three making $2030.

Among steers offered this week, some great prices were seen across the board.

Steers less than 200kg produced a top price of 634c for a line of 7-8 month old Angus listed by Englebrecht Pastoral from Denman, NSW.

A strong sale saw a 100pc clearance achieved among the 379 head offered in Tasmania this week. 122 feeder steers were listed, selling between $1140 and $1490, averaging $1313. Lohrey Pastoral from Sisters Creek topped the category and the sale with a line of 17-19 month old Angus feeder steers averaging 391kg. Another highlight was a line of NSM 12-15 month old Hereford x Friesian heifers averaging 442kg offered by David Cox, Nowhere Else, which made $1410.

In Western Australia, AuctionsPlus interfaced the Nurien Muchea monthly store sale for the first time. Online activity was strong with 106 online bids, resulting in 212 head in 16 lots sold online to a NSW buyer.