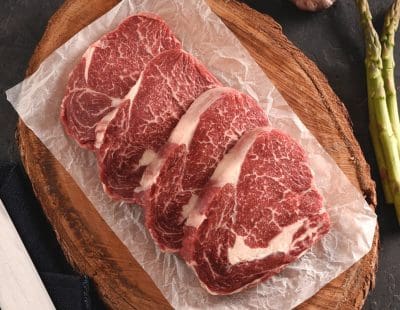 Little Joe marbling score 4 and up cube roll. Click on image for a larger view

On top of a Great Southern brand program premium that is already worth around 50c/kg over everyday grassfed MSA, the company from this week is offering a sizeable 20c/kg premium for elite carcases reaching AusMeat marbling scores of 4 or better, while delivering MSA index scores of 64+.

Such carcases are eligible for JBS’s ‘Little Joe’ program, a super-premium sub-brand that sits within the company’s broader Great Southern farm-assured grassfed brand. Click here to see an earlier story about the launch of the Little Joe brand.

The new premium adds an additional $66 a head on a typical 330kg carcase meting the MSA and company specs for 0-4 tooth cattle. About 3pc of carcases slaughtered for Great Southern at JBS Brooklyn in Victoria produce a marbling score of 4 or higher. Some individual consignments can contain as high as 20-40pc score 4 carcases.

In an email to its suppliers this morning, JBS said the premium was designed to encourage producers engaged with the Great Southern farm assured program to focus on higher marbling genetics.

JBS processes 3000 to 4000 grassfed steers and heifers each week for Great Southern, through the company’s Brooklyn (VIC), Scone (NSW) and Longford (TAS) plants.

A reasonably common trend among MSA-backed brand programs in recent years has been brand ‘segmentation’, where higher quality carcases are harvested from the general population of bodies qualifying for a brand under MSA and company specs, and sold at a premium under a separate identity.

Such moves by brand managers, including JBS, has prompted questions from beef producers at several recent industry gatherings about the prospect of sharing in the rewards further along the supply chain.

JBS has done exactly that in its initiative announced this morning.

The company’s farm assurance and supply chain manager Mark Inglis said the company had carried out a lot of analysis in the lead-up to the launch of the Little Joe program early this year, and today’s  new premium offering.

Over time, JBS would examine whether it could add a premium also for carcases eligible for its mid-range Pinnacle program (marbling scores 2 and 3, average MSA index around 63) within Great Southern.

While it’s still early days, one recent assessment ‘on the back of an envelope’ by a genetics consultant had suggested the new marbling/index premium could elevate the value of elite herd bulls capable of delivering progeny able to hit higher marbling scores off grass from $8000 a head to perhaps $15,000-$16,000, across his lifetime, Mr Inglis said.

JBS Southern’s livestock manager Steve Chapman said the response from suppliers to this morning’s announcement had been “extremely positive.”

“Over time’ we’d hope the price signal will help deliver more carcases hitting marbling score 4s or higher. It’s really the next phase of development for the Great Southern premium beef program, which is now five or six years old,” he said.

“Add that to the new 20c/kg Little Joe premium, and it can add up to $100 a head pretty quickly on the better performing cattle,” Mr Chapman said.

“Both genetics and management contribute to higher carcase and marbling merit, but genetics is a big part of the game. It was quite clear to us last year when we came third in the Great Southern supplier of the year awards that marbling is a big contributor to achieving those very high MSA index figures,” Mr Allen said.

‘Generally, there’s still a lot of potential left in lifting marbling performance in grassfed cattle. That doesn’t mean that current eating quality in brand programs like Great Southern is not good, but it’s a premium for a reason, and the Little Joe product is obviously highly sought-after in the market – and that’s mainly about the marbling.”