Part of a line of 900 Hayfield Station steers sold on Friday for a live export record price of 330.4c/kg, on-property south of Katherine.

HOT, dry conditions across large parts of Eastern Australia pushed listing numbers 28 percent higher on AuctionsPlus on Friday, forcing the scheduling of three separate sales to cope with the size of the catalogue.

Last week saw well above average temperatures for early October, confirming that El Nino is only intensifying and bringing dry and hot conditions.  This resulted in a massive jump in cattle numbers to 11,277 head, taking the total listings offered in the two online sales held so far in October to 19,992 head.

Some particularly large lines out of the Northern Territory helped add to last week’s momentum.

Adding to the big jump in numbers last week was two large lines of quality Brahman steers and heifers out of the Northern Territory.

Hayfield Station again attracted very strong live export and southern backgrounder competition for a line of 900 two and four-tooth Brahman steers, 24-40 months, 335kg average liveweight (range 300-380kg), which made 330.4c/kg liveweight, when bought by a Darwin live exporter. That valued the steers at $1106 a head, on-property south of Katherine, or just under a million dollars, the lot. Bids came from Western Australia, Queensland and the NT.

Adding considerable momentum to the result was last week’s confirmation that Indonesia has issued permits for final quarter live imports of 200,000 head. It was no coincidence that the Hayfield cattle were listed by agent, Paul McCormick, Elders Katherine, for the first convenient AuctionsPlus sale post that announcement, clearing earlier uncertainty.

The 900 Hayfield steers were followed immediately after in Friday’s sale by a line of 540 Hayfield ‘hat-brand’ Brahman heifers, 331kg average and ranging from 280-380kg, which also sold to live export – despite strong bidding competition from southern and eastern buyers looking to secure them as breeder replacements. The heifers, 18-36 months, sold for 312c or $1011 a head.

About five weeks ago Hayfield sold the heavier end of some of its 2015 turnoff – 500 Brahman steers averaging about 450kg – via AuctionsPlus for 276c/kg, again to live export buyers. That time the market destination as Vietnam (heavier weight spec than Indonesia), which was in full-swing at the time.

As Beef Central’s report at the time indicated, that was the first time that competitive bidding tension had been seen on AuctionsPlus between live export and southern processing/restocking markets.

“It was a great result for the Hayfield cattle on Friday, but it was supported by the fact that the ‘hat-brand’ steers and heifers have gathered an excellent reputation for performance in Indonesian feedlots,” Elders’ Paul McCormick said. “It certainly adds to buyer confidence, especially when prices are as high as these. It’s easily a record for northern live ex cattle.” 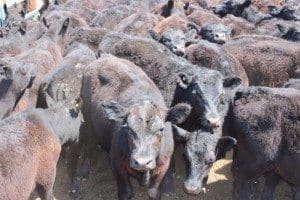 PTIC first-calvers topped the joined females prices last week, with a line of Angus heifers scanned to Wagyu bulls making $1510 a head. Older joined cows made an average of $783.

Unjoined Hereford heifers out of Coonamble with their first calves at foot made $1800 while older 3-4 year old station mated Angus cows with Moolabulla calves at foot sold for $1750. Eleven year old Angus cows from Guyra with Angus calves, joined to Angus bulls, made $1300.