There were some big price movements through the AuctionsPlus categories this week, as the heavy steer and heifer lines took a substantial hit, while some younger lines lifted in price.

Overall offerings this week fell 21pc to 15,725 head, with some good rainfall through the eastern states simultaneously reducing supplies and refreshing buyer demand through the lighter lines, with clearance rates very high through the mid-weight steer lines.

The standout changes this week was the decline in prices for the heaviest category of both steers and heifers – with both losing all last week’s strong gains.

Lighter steers and heifers fared much better. The largest number of steers this week was offered in the 200-280kg category, with the 1416 head registering a 96pc clearance and averaging 589c/kg, up 1c on last week. With similar clearance rates, 280-330kg steers averaged 8c/kg higher than last week at 539c/kg – with a 92pc clearance rate for the 1261 head offered. In the 330-400kg lines where 1166 steers were offered for an 89pc clearance, the average price for the week jumped 20c/kg to 501c/kg.

The online cow market was largely stronger this week, with PTIC cows 43c/kg higher on last week, averaging 449c – with an 86pc clearance for the 2146 head offered. “Across the board, prices were a shade dearer than the last sale, and I believe that was because we had larger lines of quality cattle,” Mr McCulloch said.

“Heifers were strong and sold at a similar price to the steers.”

Other highlights included a pen of 21 Speckle Park cross heifers, which averaged 295kg and were bought via StockLive by agent Ben Goodman, Ian Morgan Livestock, Quirindi NSW, for $1480/head.

In total, Mr Goodman secured more than 100 head of mostly Angus heifers for his Quirindi clients, who operate backgrounding and breeding operations more than 800km away from the NVLX selling centre.

“There is still strong demand for heifers,” he said.

“I think there are producers who have held off during the last six months or so hoping the market would ease, but it hasn’t, so they have reached a fork in the road where they are now opting to restock.

“StockLive saved me two days of driving and I was able to get the exact heifers I was looking for.”

Also in the consignment Mr Goodman secured was a quality offering of 287kg Angus cross heifers which returned $1290/head.

Across the total yarding, Mr McCulloch said Angus steers sold from 480c to 600c/kg, and Shorthorn cattle made 500-600c/kg.

More than 150 people tuned in via StockLive. 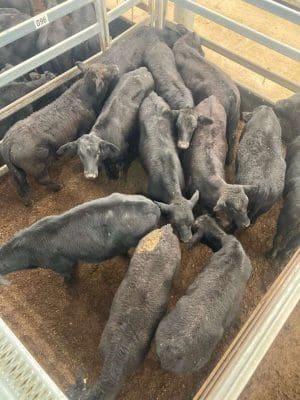 “We are in the phase of restocking at the moment, so depending on the season we might join these heifers to later trade as Preg Tested In Calf, or keep them for ourselves,” Mr Fenwicke said.

“Santas are our preference and we are trying to increase our breeders but we also want cattle that will be suitable to trade.”