The premium for EU-accredited white-faced cattle remained steadfast on day-three of the Hamilton beef weaner sales.

Offering a 2555-strong penning of Hereford steers and Euro-breeds mixed sexes, the premium for EU-credentialed Hereford cattle was pushed to as much as 30c/kg on selected heavy lines while averaging 20c/kg across the lighter 280-300kg drafts.

Repeat grass-finisher support from Ballarat and the central west of NSW was the key underpinning the persistent feeder demand to result in the heavier drafts topping at 330c/kg (av 323c/kg) while the lighter EU white-faced sales averaged 316c/kg.

VIDEO: Watch the action from the day-three opening sales:

Among the leading Hereford sales, Wallacedale producers Leon and Sally Wheeler sold the opening pen of 42, 428kg, at 321c/kg for the top of the market value of $1374 a head.

Lighter EU credentialled lots made from 300 to 330c/kg.

In the Euro-breeds steer section, where EU-credentialled cattle were not as frequently retained to the EU-production scheme, the EU premium was clearly not as significant.

Among the leading sales in the Euro-breed steer section the annual draft of Malcolm and Sherrie Robertson’s “The Highlands” Simmental-Shorthorn-Hereford steers from Paschendale were once again a feature of the market.

These were also retained to the EU-system by repeat buyer Princes Royal Station while a yard of 20 Simmental steers, 410kg, sold account of John and Roma McErvale “Cadell” Branxholme made 322c/kg ($1320) on a bid placed Landmark Millicent, SA.

Although available the vast majority in the Charolais steer line-up were not retained for EU-finishing.

Mt Gambier, SA agency Miller Whan & John for the Ogilvie Group were also prominent bidders in the Euro-breeds section taking its haul for the first three days to a four-figure along Nevins and Co, Inglewood and Landmark International.

These orders both scored multiple loads on the day while Sydney Wholesaler and Upper Hunter, NSW finisher Alexander Downs secured the entire of pure Limousin weaners, from vendors Innisfail and Glanleam, noth of Narren, paying 308 to 332c/kg for the steer portion and bidding 320 to 336c/kg for their heifer yards.

The demand, however, for other Euro-breed heifers was soft in comparison according to JM Ellis auctioneer, Jack Hickey.

Listen to his wrap of the sale:

Charolais heifer pens were mostly sold from 245 to 260c/kg while odd pens of Simmental-cross made to 274c/kg.

The best priced of these was a yard from Des and Noela Stuchbery, Drumborg, 394kg that realized $996 while “The Highlands” Simmental-Shorthorn-Hereford heifers, 362kg, made 274c/kg and return $991 a head.

Similar to the previous two days, officiating agents offered, by auction, a 2.5-litre package of Dectomax cattle drench in lieu of its usual best-presented yard award.

The proceeds, which collectively raised $4550 so far this week, will be forwarded to the bushfire appeal. 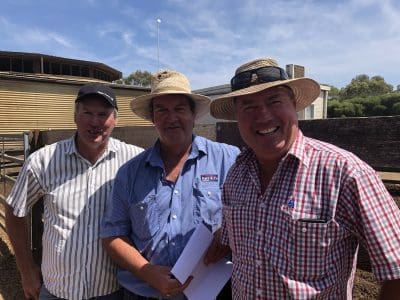 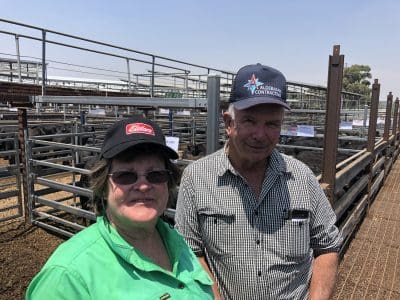 Carolyn and Paul Malseed, daughter Hayley, sold the annual draft of Yarram Park-blood Orana Hereford steers at the Wednesday market. Their draft of 146 this year averaged $15/head and 12kg less than 12 months ago. 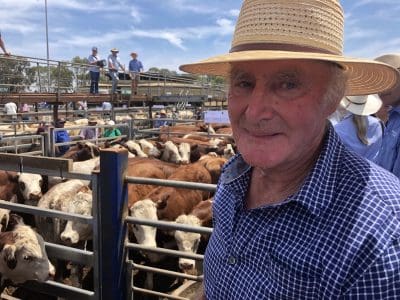 Malcolm Robertson, Paschendale, with his highly regarded “The Highlands” Simmental-Shorthorns-Hereford steers that made to $1348 (419kg) while his heifers topped at $993 (363kg). 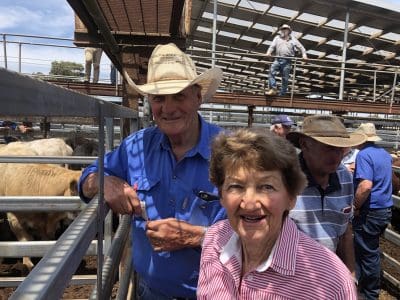 John and Roma McErvale, Branxholme, sold multiple pens of Cadell mixed sex weaners by Simmental bulls at the Wednesday market. They were very pleased with their results especially with the EU premium. 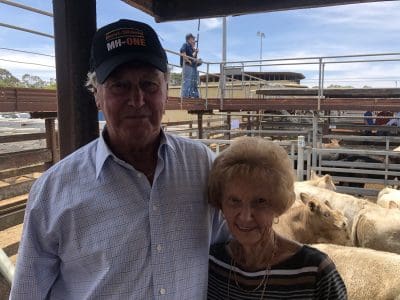