John and Liz Craig, with daughter Maggie and son Sam, of Coleraine won the Hereford Society best present ribbon for their top draft of Yarram Park-blood Inverall steers. They are pictured with Hereford Society’s Michael Beattie.

Northern-based lot feeders were again a force however their influence over the Elders and Landmark conducted market was less powerful due to the limited numbers fitting these criteria.

Buyers from interstate again outbid the home-state support claiming 65 percent of the total all steer penning. However, a more concentrated focus from West Gippsland and locally from Hawkesdale carried the weight of the local demand.

Overall the 2309-strong Angus, Hereford and Euro-breeds steer market provided an average weight of 341.5kg, one kilogram up on 12 months ago.

Similar to the previous day, officiating agents offered, by auction, a 2.5-litre package of Dectomax cattle drench in lieu of its usual best-presented yard award the proceeds for the bushfire appeal.

The pack, donated by Zoetis, raised $1300 on a bid placed by Jean Maling family of Portland, a participating vendor in this sale.

Video of the opening sales:

Watch the day two action from the Hamilton weaner sales, a sale of 2300 Angus and Hereford steers by Elders and Landmark

Both lots were secured by Australian Food and Fibre’s  Conargo, NSW, feedlot.

In the feature Elders Hereford run, which saw 18 lots carded as EU-accredited, demand varied widely from 281c/kg to 319c/kg with one isolated sale at 326c/kg.

Video of the feature Hereford sales:

Watch the Hectors sale on day two at Hamilton

Landmark auctioneer, Sam Savin said considering that 90 percent of the country was either in drought or on fire the result was pleasing.

“But there were lessons to be learnt” Mr Savin said.

“If you’re going to breed quality Angus cattle EU accreditation is a must, and they need to be properly weaned” he said.

In his interview with Beef Central, Elders auctioneer Aaron Malseed agreed saying that further the sale progressed the “stickier the job got for the non-EU cattle.

This was especially the case he said for the Hereford lines but ii did bring into the market an inquiry from the New England, NSW at these lower rates to place a floor in the demand.

Mr Malseed said while there was slightly less interest shown by the feed lots more inquiry from local bullock finishers held the market at a satisfactory level. 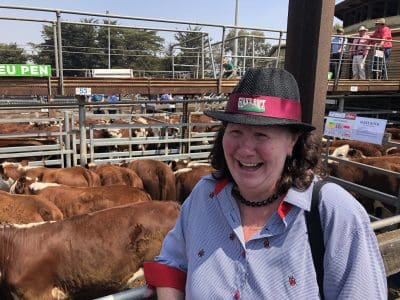