FEEDLOTS and local restockers absorbed almost all of an increased yarding at higher prices at the Elders and Nutrien Paull & Scollard Wodonga store cattle sale of Thursday.

Values achieved for the 2000-strong penning varied from 15-25c/kg higher with lighter weaner sales most advantaged. 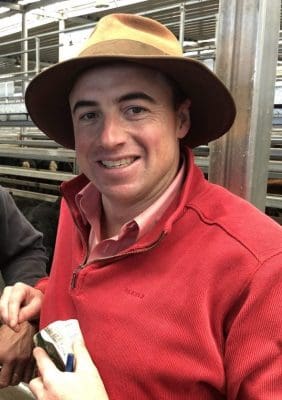 Brett Shea, Elders describe the action as red-hot sale that ended with some amazing results.

“We’re on the cusp of great season here in the northeast (Victoria) and the Riverine Mr Shea said.

“And, today, the buyers fought for their cattle as if they feared missing out”.

Mr Shea said the sale only had the one main feature line that formed the cornerstone of the overall supply with the balance being smaller consignments that required a good deal of classing.

However, as an auctioneer he said the demand felt stronger and was stronger across the whole of the sale, and there were no discounts applied to those smaller drafts.

Nutrien P&S, auctioneer, Wade Ivone said the yarding carried a “bit more cover” than their previous (September) sale to the reflect benefits of the excellent early start to spring.

“Our local buyers defended the patch well” he said.

“I would agree there is some concern growing of not filling paddocks, and the commission buyer would hold most of the “away orders” didn’t have the influence as normal”.

“The sale was at least 20-30c/kg dearer and the Euro-run in particular sold above expectation” Mr Ivone said.

Wirruna-blood, these were drafted into tight 30-kilogram weight ranges with the heaviest pen of 30 weighed with a 307kg average.

Other sales of steers included

Unjoined heifer sales were also advanced by a similar 15-30 cent margin with the area’s opportunity feeders leading the demand.

Most Euro-cross and the heavier lots British-breed models were paid close attention for all the secure values in a tight $2000 to $2250 before topping at $2330 for a lot of 23 Angus, 436kg, Connamarra-blood, offered by P&B Hindle.