THE Eastern Young Cattle Indicator has started 2020 on the up, off the back of widespread rainfall across New South Wales and Queensland.

Rainfall totals of more than 200mm were reported in some parts of northern NSW and southern QLD, reinvigorating restocker interest for young cattle throughout the eastern states, albeit follow-up rain is still required for most regions. 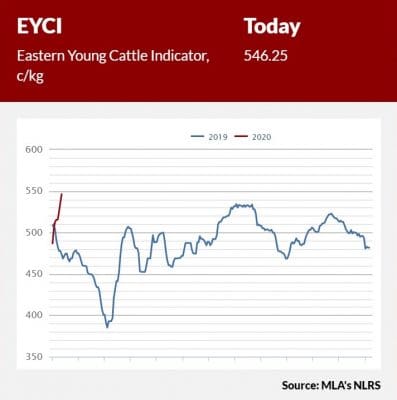 On Wednesday, the EYCI rose to 546.25c/kg carcase weight, up 33c/kg from the week prior and 74c higher than this time last year (see image of Beef Central’s home-page graph). The indicator is currently tracking 91c/kg higher than the 10-year average for January.

Whilst the EYCI contracted at the end of 2019, finishing up at 481.75c/kg, it has continued to trend higher throughout January to reach its highest level since March 2018.

Compared to this time last year, where the EYCI fell to 468.5c/kg following a hot and dry summer, the recent rainfall has offered some much needed reprieve to producers. Follow up rain will be required before any substantial moves higher, as hot conditions are anticipated for the remainder of the summer.

Producers have shown their intentions as a result of the recent rain, holding back stock, reflected in yardings dropping sharply compared to year-ago levels. For the week ending 18 January, eastern states yardings were down 46pc when compared to the same week last year. This has resulted in stronger competition for store cattle between encouraged restockers and already active feeder buyers.

Yardings peaked over autumn last year, seeing the EYCI fall below 400c/kg in the month of March. This year has seen slightly better conditions to date. However, a lack of follow up rainfall would see the supply of young cattle lift, resulting in similar downwards pressure for the EYCI.