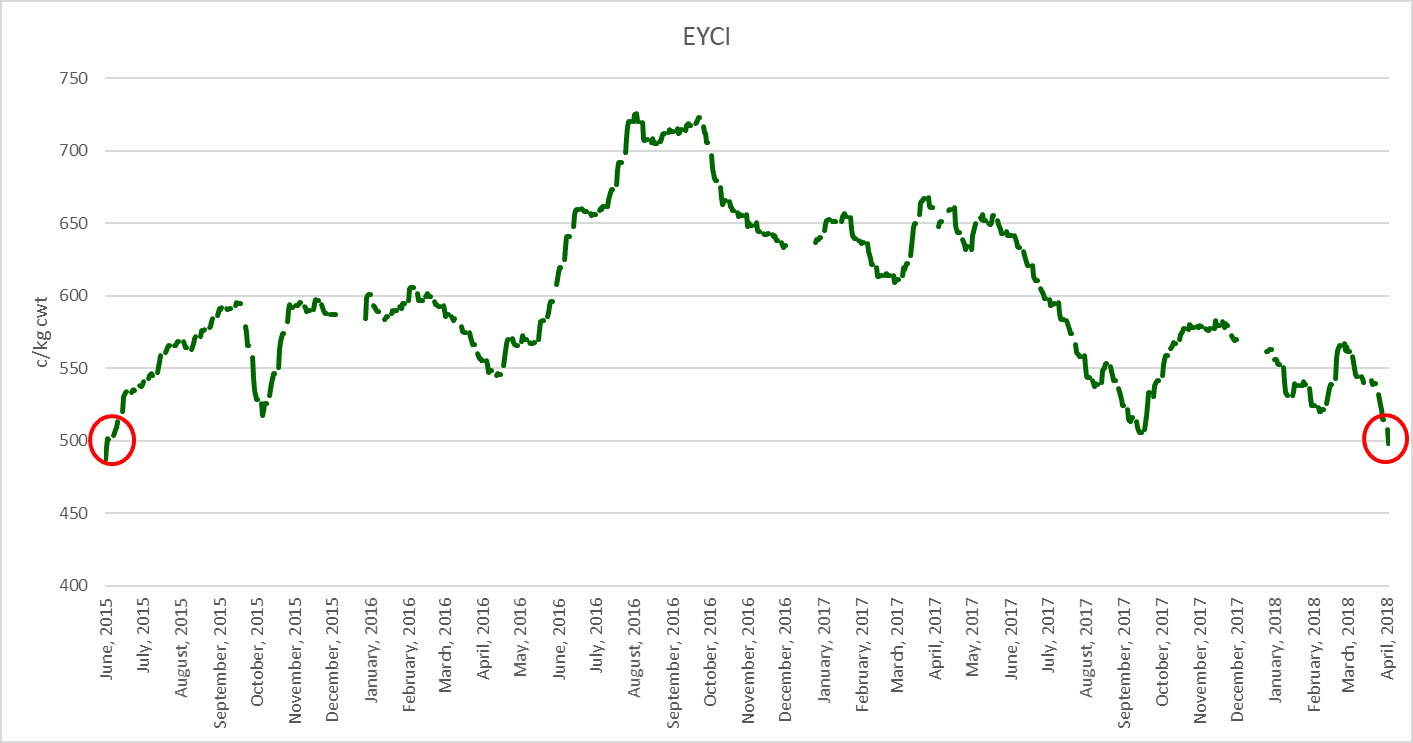 THE industry’s primary cattle price benchmark, the Eastern Young Cattle Indicator, has fallen through the 500c/kg barrier for the first time since 2015.

Under pressure from very dry conditions across large parts of southern Australia, a lack of follow-up rain in Queensland, and mounting competitive pressure in export meat markets due to an explosion in beef production in the US, the EYCI has slipped badly in the past few weeks.

The National Livestock Reporting Service last night produced an EYCI daily figure of 498.75c/kg (carcase weight equivalent). The figure was down a massive 67.73c on last week; and almost 154c/kg behind this time last year.

It’s the lowest number recorded since June 2015, when the industry’s big shift in price was just beginning to gain momentum. At its highest point 18 months ago, the EYCI reached 720c/kg, representing a 31pc fall since then.

The lack of decent follow-up rain in Queensland, and little to no rain across many supply regions of the nation’s south-east during the March quarter has been a key factor in the indicator’s downward trajectory.

Rapid declines in prices seen at major store sales across eastern Australia over the past week has hastened the slide. Roma store sale yesterday, with almost 3600 EYCI-eligible cattle yarded, dropped more than 34c/kg in value on the previous week. Gunnedah sale was much less affected, down only 3.8c/kg on eligible cattle, but was still down 50c/kg on a month ago.

MLA market analyst Tim Ryan said the EYCI had dropped about 60c/kg since its brief rally after Queensland/NSW rain back in March.

“On the supply side, it’s primarily being driven by a lack of follow-up rain in Queensland, and very dry conditions in the south,” Mr Ryan said. “The outlook for further rain now is fairly neutral, and there’s not a lot of support for additional pasture growth in the Queensland region from now on.”

“That kind of sentiment is now feeding into the Queensland restocker decision-making process, and its becoming evident in the EYCI movements,” he said.

When southern Australia gets its autumn break will also have some bearing on the future trend in the EYCI.

“Any rain in the south will help,” Mr Ryan said, “but the biggest issues is that the Queensland herd has suffered the greatest liquidation over the past three years, and that’s where the primary demand for cattle is going to be, going forward,” he said.

“Rain in the south will help underpin the cattle price and EYCI somewhat, but its only when we see good falls in Queensland, that prices will rally again.”

Mr Ryan said a lot of other factors overseas were also having a bearing on the EYCI movements.

“On global meat markets, conditions are getting tougher, primarily because of the big build-up in production in the US this year. We’re expecting the second quarter of US beef production to be up 10pc year-on-year. US meat is getting cheaper, and that not only impacts on Australia’s performance in the US market, but also in Japan and Korea, where US export supplies are increasingly competitive.”

“It will inevitably impact the Australian cattle market, because we have so much exposure to those three markets. It’s reflected also in grid prices this week, which have come back, as has the Darwin live cattle export prices.”

So far this year, although at a lower price level, the EYCI is following a similar trend to 2017. The early autumn uplift in the EYCI in 2017 was also due to a significant weather event – Cyclone Debbie – and the very wet weather across the east coast that ensued. However, a dry winter prevailed, which saw cattle slaughter levels remain elevated and prices steadily decline.

“By and large, rainfall and the season will have the biggest impact on the EYCI, but the global meat market and currency fluctuations will play a role as well,” Mr Ryan said.

At this stage, the Bureau of Meteorology outlook for the May–July period is not giving much away for what’s in store for much of southern Australia, with a mostly neutral outlook for late autumn and winter. The exception is western Victoria and Tasmania, where above-average rainfall is likely. The prospect of above average rainfall is 55–65pc across parts of Queensland.