PREMIUMS paid for EU-eligible HGP-free grassfed steers have opened up considerably in the past couple of months, with some Queensland supply chains paying as much as 45-50c/kg over conventional cattle last week for suitable lines.

The premiums have enlarged considerably since trading back at the start of the year, when EU cattle were worth about 10-15c/kg more than conventional slaughter cattle of similar description. 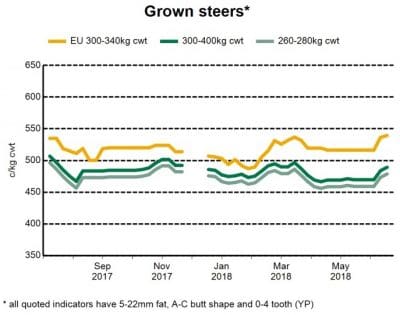 Click on image for a larger view. Source: NLRS

The National Livestock Reporting Service had Queensland grassfed steers 0-4 teeth 300-400kg at 489c/kg on Friday, while EU steer 300-340kg was quoted at 539c/kg. While those figures are averaged across a number of competing processors, they represent a premium of 50c/kg dressed weight, worth $160 on a 320kg steer carcase.

One individual Queensland processor’s quote for EU-eligible steer last week was considerably higher than the NLRS report, at 545c/kg, against a conventional four-tooth heavy steer quote from the same company grid at 500c.

The trend perhaps partly reflects the fact that heavier, better slaughter cattle in general have tightened up in supply, as the year has worn on.

A source close to the EU beef trade suggested one reason for the expanded premium might be a reduced emphasis on grainfed high quality beef for some exporters into the EU, due to access difficulties. The EU’s grainfed quota is administered by importers themselves, often filling very quickly on a quarterly basis, unlike the Hilton Grassfed quota, which is managed on a country basis.

The rise in grassfed EU steer price could also be due to export stakeholders seeking to use up their EU Hilton quota entitlement, the contact said.

Australia is about commence discussions with the EU over the establishment of a Free Trade Agreement, but it’s widely anticipated that the process will be ‘long, and drawn out’, before any deal is reached. One source suggested agreement might be reached and implemented in 2020, if the process went smoothly.