A FUNDAMENTAL shift appears to be taking place in beef production systems in Queensland, and some regions in southern states.

Large numbers of commercial cattle producers who for decades (in some cases, generations) have taken pride in producing large, even lines of heavy grassfed ‘export ox’ are reconfiguring their businesses, focussing on selling younger, lighter feeder or backgrounder steers.

Many were originally forced into the position by the 2019-20 (2018-20, in some regions) drought, gradually selling-down their older male and female cattle to manage scarce feed resources.

With recovery now well and truly underway after back-to-back excellent seasons, many across eastern Australia now the face the dilemma: Do we attempt to get back to producing heavy grassfed slaughter cattle, or should we fundamentally reconfigure our operations to permanently target feeder cattle?

Beef Central spoke to a range of stakeholders from stock agents in ‘bullock heartland’ areas of Central Queensland, to MLA analysts, backgrounders, lotfeeders and processors, to gauge opinion for this report.

All agreed that the drought was a real catalyst for the current position many traditional bullock producers find themselves in. Operators progressively sold down their older male cattle, as well as breeders, to stretch meagre feed reserves as far as possible.

The issue is most relevant in Queensland, where heavy export grassfed steers finished on buffel or rhodes grass, leucaena or native pastures have been the ndustry mainstay for the past 40 years, since the US export market first opened up. However there are also pockets of dedicated bullock producers in parts of NSW, Victoria and South Australia.

A prominent Central Queensland stock agent told Beef Central they were currently in doing the sums with a number of large clients over whether they should return to their traditional roots as bullock producers, or turn into dedicated feeder/backgrounder producers.

One of the first issues that emerged in discussions around this topic was cash flow. With remaining post-drought male cattle still at a relatively young age, some producers would effectively face a 12-15 month window with little or no income, if they tried to push back into bullock weights, as they wait for younger steers to grow out.

Some contacts spoken to for this report suggest that strategy is now prohibitive, especially given current cattle price signals.

On the flipside, there are some obvious attractions in permanently re-aligning a beef enterprise with feeder steer or backgrounder production.

The first is that it frees up paddocks to potentially run a lot more breeders, taking some of the best country on a property previously used to fatten bullocks to turn over to breeders. Many properties could easily run another 20-25pc breeders by abandoning the bullock finishing phase. It also condenses the production cycle considerably, often by 12-15 months before sale.

Countering that, running more breeders can expose an operation earlier, and more severely, to drought.

Secondly, it reduces an enterprises exposure to variable seasons and drought, in not having to rely so much on a ‘decent season’ to finish the oldest cohort of steers.

Thirdly, it frees up capital previously tied up in growing steers out to bullock weights – at least 12-18 months in some cases.

To qualify the above statements, there were a lot of variables involved in the decision-making process, contacts told Beef Central. Quality of the country available was a big factor, as was the variety of country available on one or a number of integrated properties in an enterprise.

And there would always be a cohort of ‘died in the wool’ grass bullock producers who would opt to move back into heavy slaughter steer production – no matter what.

Still referred to by some older stakeholders as ‘Jap ox’, there remain many beef producers in Queensland who hold an enormous sense of pride and achievement in turning off big, shiny, grassfed bullocks, 0-4 teeth, anywhere north of 320kg carcase weight, and sometimes closer to 400kg. Beef Central recently ran an advertisement from a Central Queensland bullock producer seeking processor offers for upwards of 500 grassfed ox, +600kg in liveweight.

One contact suggested generational change would also play a part in such decisions. He said younger producers who had recently taken over management responsibility from their previous generation, would likely be more receptive to major structural changes like this.

Price signals are obviously going to be a big, big factor in any decisions producers make about how they configure their operations.

This year, feeder steers have leapt to record highs, and the relativity with finished ox has changed dramatically. That’s being fuelled by exceptionally high demand from lotfeeders to fill pens, and service the booming international demand for quality grainfed beef. But history clearly shows that such comparisons can change quickly, and it takes a long time to turn around ‘the beef cattle breeding and growing ship,’ one contact said.

What is clearly evident is the large, and growing premium for feeder-weight steers (yellow plot line, and red dotted linear average line) over finished bullocks (green line, and blue dotted linear line) since 2017, and particularly since 2020. (More graphs at base of page). For long periods in the not too distant past, a typical feeder steer was worth about half the price of a heavy export bullock, on a $/head basis. Compare that with the last 12 months, when the extraordinary rise in feeder prices, relative to finished ox, has meant that a 450kg feeder is often making just a few hundred dollars less than a full-grown meatworks bullock.

“It means it’s a no brainer to sell male cattle as feeders in the current market climate, rather than hold them for the extra year,” one supply chain manager said.

MLA no longer produces a feeder indicator for paddock sales, but the NLRS saleyards feeder indicator currently sits at 5835c/kg – somewhat down from its recent highs around 570c, but at least a dollar a kilo higher than this time last year. Heavy saleyard steers, in comparison were reported today at 447c/kg liveweight.

A key question is: How much would relatively prices have to change, in order for grassfed bullock production to come back into favour?

“It would have to move a very long way from where it is today,” one supply chain manager told Beef Central. “Feeders would have to lose a considerable amount of value; or grassfed meatworks bullocks would have to rise substantially – or possibly both,” he said

So are there any signs of the trend in the market already?

There are no easily accessible industry-wide figures for grassfed export steer kill in Australia, however anecdotally, while grassfed steer kill has fallen dramatically since before the drought, feeder steer numbers, as measured by cattle numbers on feed Australia wide, have remained remarkably stable, both during and after the drought, at around 1.1 million head. 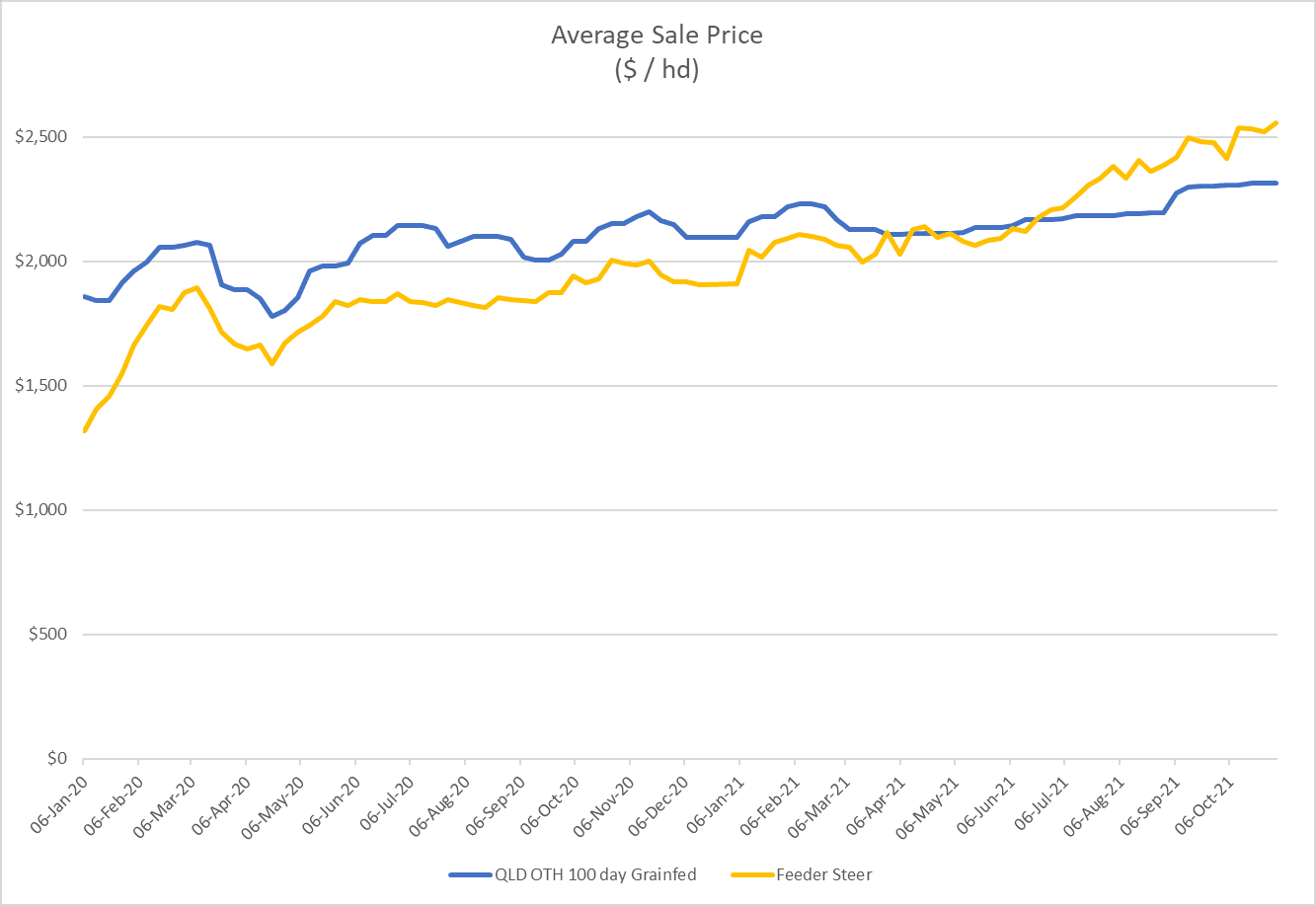 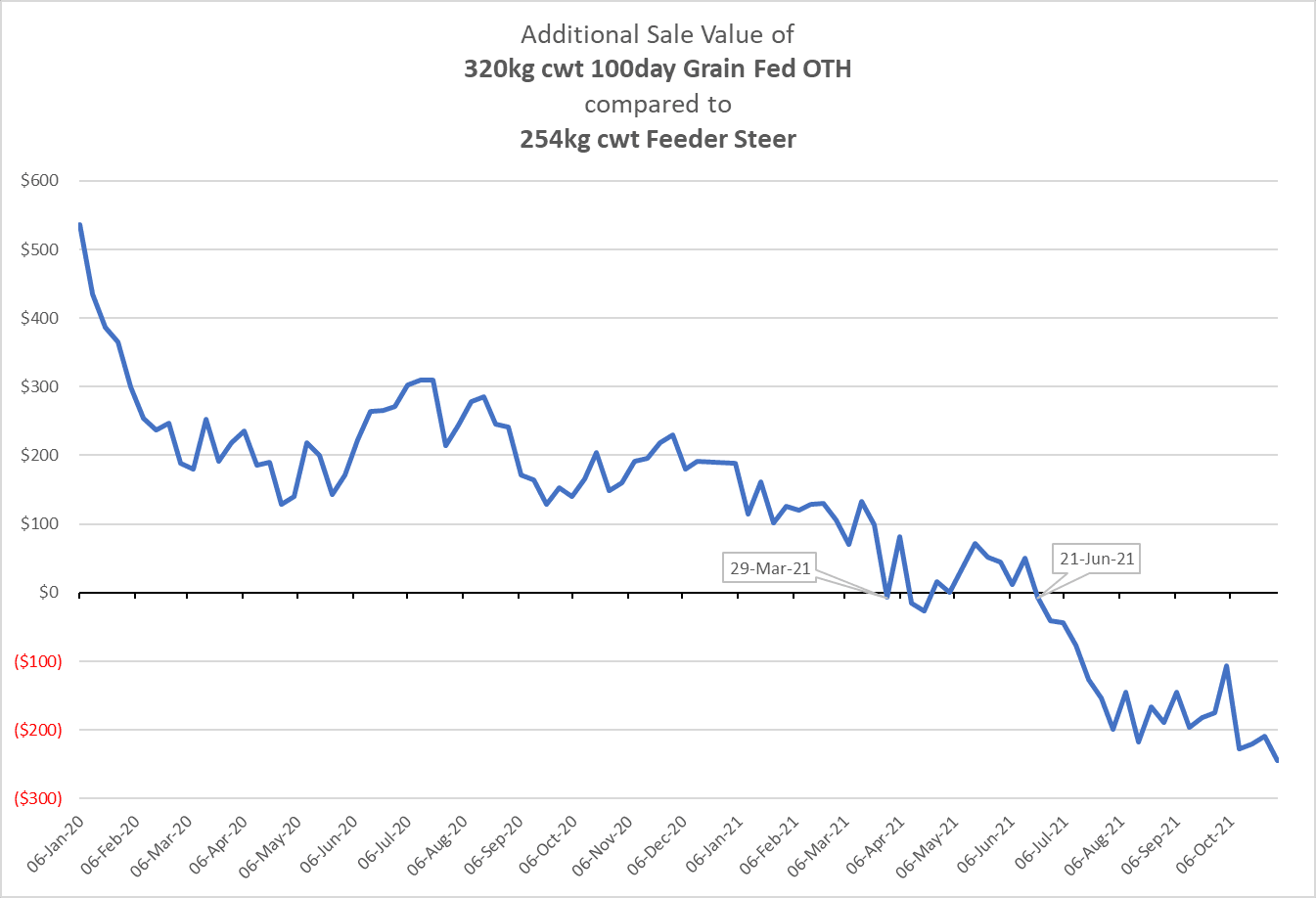 MLA has filed a report this afternoon on a similar tack to the above, highlighting an interesting shift over the past decade in turn-off points for Queensland steers.

Analysis of yarding volumes across all Queensland saleyards for heavy steers showed a decline in overall throughput since January 2010 to March 2022. Meanwhile, feeder steer throughput has increased substantially, with increased capacity and demand for consistent product from consumers driving the sectors’ growth.