The number of cattle penned at Dalby increased by close to 1,000 head to 2,409. A small consignment of 148 head from far Western Queensland plus 199 from New South Wales were included in the lineup.

Export buyer attendance was good with some additional support in the cow section. The regular feed and trade buyers were active in the market. An in-demand line at Dalby yesterday was this consignment of 63 Charbray/Charolais cross steers from Koatanui Pastoral Company, Wandoan, pictured with Nutrien auctioneer Terry Ryan. The 496kg heavy feeder steers sold in seven pens to one buyer, Morgan Pastoral Company, for 402.2c/kg, to return $1995 per head.

Prices for light weight yearling steers and heifers returning to the paddock improved by 20c to 30c/kg.

Yearling steers to feed averaged 10c/kg better with the medium weights pushed on by restockers. A good sample of heavy grown steers and bullocks to export processors sold to strong demand.

Despite the extra buyers in the cow section prices remained close to the previous week. Allan Bosse, Glenidle, Pittsworth, was in the market for milk to four tooth cattle for the local butcher trade at Dalby yesterday.

Light weight yearling steers returning to the paddock made to 548c to average 480c/kg. Yearling steers to feed for the domestic market made to 480c to average from 436c to 449c/kg, with restocker lines averaging similar money. Matt Boland and son Jack from The Dell at Meandarra and Stephen Grimes from Cadilla, Hannaford, caught up at the Dalby sale on Wednesday.

Heavy grown steers to export processors made to 366c the bullock portion to 363c to average 352c/kg.

The usual panel of buyers were present and a few more were active on last week. Cattle going to processors softened slightly, with heavy cows coming back to around 290c/kg on average and bulls 10c/kg behind that. Bullocks averaged 350c/kg and heifers going to processors were back 10 to 15c/kg. Yearling cattle seen a good improvement on last week with both steers and heifers under 280kg up around 20c/kg on average. Not much change in your feeder cattle, heavy heifers to feed improved to 395c/kg. 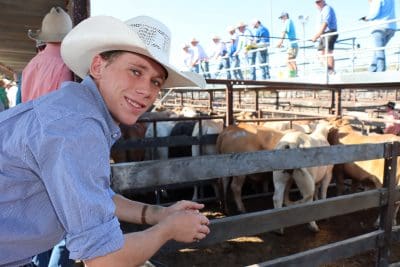 GDL agent Braydon Manning keeping an eye on the market at Dalby.

Faces at the sale Jordan Wenham, from Grant Daniel Long Taroom, with his Miles-based colleague Jack Hannah preparing for the sale at Dalby on Wednesday. Attendees of the Dalby cattle sale watching on. Jeremy Hetherington, who owns Milanbry at The Gums and Myora Hannaford about watch some of his pens sold at Dalby.