HAS encroachment of Wagyu feeding operations in the Australian grainfed industry exposed the broader beef industry to greater vulnerability during dry times?

I believe there has been a structural change in the feedlot industry in Australia since the last time drought was experienced, which has led to a more vulnerable period for light feeder steers in times of drought.

That structural change has been the growth of the Wagyu beef sector, which today industry participants estimate is close to 130,000 head on feed at any one time. There are no official figures on this data, but talking with key stakeholders, I am confident this estimate is representative.

The most recent ALFA quarterly cattle on feed report for the March quarter had 1.025 million head on feed, with a capacity estimated at 1.292 million head. Many in the industry regard the current level of occupancy as ‘full’ capacity in practical terms, as the last 250,000 head is always difficult to fill due to pen scraping, maintenance and other reasons such as smaller opportunistic feedlots that may wait for cheaper cattle or grain prices before committing. Others say the simple transition of cattle moving in and out of yards, which sees numbers always changing has an impact. Either way, Australia’s feedlot sector was regarded by many to be near full capacity at the time of the last survey.

This is a critical number in drought years, because in the past cattle producers have relied on the feedlot sector to take drought-exposed cattle to help mitigate the impact, but this year, close to the estimated 500,000 head could be displaced over a year due to the long-term Wagyu ‘residents.’

The evolution of the Wagyu industry has provided stability to the feedlot sector and in the last three droughts in 2002/03, 2006/09 and 2013/14, Wagyu feeding was a fraction of its current size (in earlier times, almost non-existent).

So in many respects, should the drought worsen – Australia is in a new environment, where there is reduced surplus feedlot capacity to accommodate drought affected cattle.

This, to me, is resulting in the lighter feeder steer market being more vulnerable.

The impact in today’s feeder steer market is seeing price spread between animals that are +300kg in weight and those below widening – at the moment it is about 40c/kg, but I can’t help believe this will grow significantly should there be no rain.

In other words heavier feeder steers will get harder to find and command a premium as feed becomes scarce and lighter feeder steers abundant. What happens to these lighter feeder steers when the ‘feedlot full’ sign goes up at the front gate? They either stay on-farm and are fed a maintenance ration, are agisted or go to slaughter. The slaughter option is difficult because for processors, these are low-yielding animals and costly to kill given the limited marketing options with such light carcases. Hot boning is an option for some (at the right price), but should the cattle numbers increase dramatically, then kill/boning labour capacity becomes also another potential issue.

Are lighter feeder steers today more vulnerable in drought than ever before?

When looking at the extreme lows of three previous droughts (see graph below) – 275c/kg CW has been the average low, but that had been from a high of 420c/kg hence a 35pc fall. Since October 2016 when the EYCI high was 725c/kg, we have seen already a price correction of 35pc, so if feeder steers fall further from here, on percentage terms, then yes, feeder steers are potentially more vulnerable than before.

But in terms of absolute pricing and falling back to 275c/kg, I do not think this will happen, and therefore in flat price value terms (as the trend indications below show), this is highly unlikely. Therefore in absolute price terms, no, the lighter feeder steer market is not more vulnerable than ever before.

It is early days, but these are some of potential ‘bumps in the road’ ahead I see for the Australian meat and livestock sector in the next six months, should drought persist and the potential impact of what I regard as a structural change in the feedlot sector.

The trends I have outlined below do not take this change into consideration, as I believe we are in a new era when it comes to drought and its impact on pricing – but I think it’s important to keep these potential new-era changes in mind when looking at past trends.

Note these trends are my personal view and I would always recommend seeking advice from your livestock agent on when best to sell your own cattle. The purpose of this snapshot is to look at some ‘what if’ scenarios.

In previous discussion I talked about why the correlation with the US/Australian cattle price trend is so high, and I referred to several possible reasons: similar severe droughts two years apart; similar rates of liquidation and rebuilding. But an added dimension raised by a US analyst last week was the extreme record low US herd in 2014 of 88.53 million head and the extreme 24-year low of the Australian herd in 2016 of 24.97m head – both in an environment of growing global demand that saw record cattle prices in both countries in each respective year, once again two years apart. This two-year price lag relationship has many US analysts equally intrigued and interested in its occurrence.

As stated before, the correlation between US cattle prices and Australia’s EYCI for the overlapping 3.5 years is 88.5pc so far, which continues to be a very strong price relationship.

Should this mirror trend continue, it would put the potential EYCI low at 400c/kg in October this year. But this does not account for any potential bottleneck in lighter feeder steers alluded to earlier in this article.

Where do Australian cattle prices currently sit, in comparison with international competitors?

It should be noted that there is a one-week lag in the cattle prices and at the time of reporting Australia’s EYCI value was 484c/kg CW. Australian cattle are estimated to be 16pc over-valued against average world prices, which mean they would need to fall to 407c/kg CW to be on-par with global values.

As with last month, Brazilian and Argentinean cattle prices are particularly weak, which has seen a surge in exports from those countries, with a 20pc increase in March beef export values driven primarily by China and Hong Kong.

The comparison of previous Australian cattle cycle trends is an inexact science, but it does highlight that the dry conditions have potentially brought forward a bottom before October. In discussions with industry participants, the marketings out of Queensland feedlots look slow for June and July, with an increase expected in August.  There will be no shortage of ‘short-term’ residents to fill these places, but it does make me think that July, which traditionally has seen good cattle turnoff in Queensland, might see the bottleneck get particularly difficult and lighter steers get even harder to sell.

Indexes realigned to assist in comparing

The continued dry conditions are highlighted in the pasture and rainfall charts below, and the trends outlined using all three analysis methods point to a hard price landing in October, or potentially earlier.

In the introductory remarks in this item, I have alluded to the impact of the structural change in the feedlot sector and the potential impact of capacity displacement by Wagyu cattle in place of 70-100 day grainfed animals, which I estimate to be possibly 500,000 head over a full year – a significant amount.

As stated previously, should the trends outlined come to fruition, then in percentage terms of price movement, feeder steers are more vulnerable today than in the past due to drought, but in absolute price terms, I cannot see prices getting as low as 275c/kg, with trends showing a hard landing potential of 380-450c/kg CW.

I do not know if anyone can clearly predict what the ramifications will be over the next 3-4 months if the bottleneck of light feeder steers occurs due to the ‘feedlot full’ signs going up.

There is likely to be continued pressure on grain prices until the next season’s feedgrain crop is available, as both feedlots and farmers will need to maintain feeding there animals.

July strikes me to be one particular month that looks vulnerable on feeder cattle pricing, with a potential oversupply of lighter animals, but I am sure there will be many other moments of vulnerability if the current dryness continues. 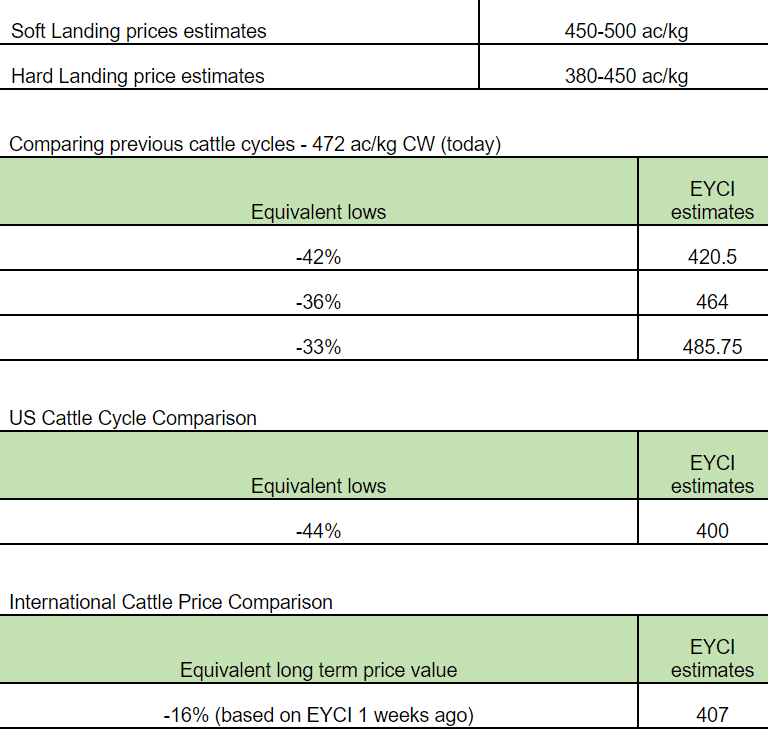