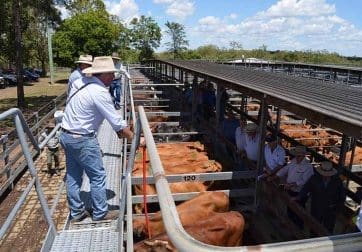 The future of cattle sales in one of northern New South Wales largest cattle selling centres is under a cloud after the local council took the dramatic step of suspending this week’s cattle sales after agents refused to support its new fee increases.

The Richmond Valley Council has announced it has cancelled this week’s sales at the Northern Rivers Livestock Exchange at Casino after agents decided not to sign selling permits supporting recent fee increases.

All scheduled sales at the centre are effectively in doubt until the issue is sorted out and an agreement is reached.

As of Monday morning there were few signs of the standoff being resolved, with Casino agents encouraging vendors needing to sell cattle as dry conditions worsen to contact them to make alternative selling arrangements.

The Northern Rivers Livestock Exchange is a key contributor to the Richmond Valley region’s economy, trading more than $113 million worth of cattle last year. In 2015-16 it was the fifth largest cattle-selling centre in NSW by throughput, selling 107,000 cattle.

The Richmond Valley Council has recently secured $10.5 million in combined Federal and State Government grants to go towards funding a $14m upgrade of the NRLX which will include a roof and soft flooring.

It is understood the council has also recently taken out a low interest loan for $3.5 million to fund the balance of the upgrade cost.

Central to this week’s standoff is the Richmond Valley Council’s decision to introduce a new “business usage fee” for agents totaling $1 per head of cattle from July 1.

The council has defended the increase as a necessary move to fund repayments on its $3.5m loan, and says it wans to avoid any reliance on ratepayers’ funds.

In a written statement mayor Robert Mustow said a fee structure had to be developed to ensure the NRLX operated as a self-sustaining business unit, “with next to no reliance on ratepayer funds.”

Agents however have strongly objected to being charged increased fees before the work is complete. The finished upgrade, and the benefits that will come with it, is still more than 12 months away, they say. Agents say they currently have access to a much smaller number of pens while the construction work is underway, and argue it is unfair to be charged an additional fee until the upgrade is completed.

“They have pulled half the place apart and we have only got half the saleyard to work in, but they are still getting full tote odds for half a facility.

“Our argument is when the show is complete and built and everyone is happy, stick us then.

“If you go and camp at a motel if it is under renovation you don’t get charged full tote odds, do you.”

In recent months the Richmond Valley Council and Casino Auctioneers Association (comprising the firms Ramsey & Bulmer, T&W McCormack, George & Fuhrmann, Ian Weir & Son and Ray White Rural) have been in discussions about a new fee structure for cattle sold in the saleyards.

Mr McCormack said agents had refused to sign off the council’s proposal, which would have meant agreeing to an increase in selling fees from $8.50 per head to $12.50 over three years. As a result of their refusal to support the increase, the council had now cancelled scheduled sales until the issue is resolved.

In a media statement the council acknowledged “no one likes a fee increase”, however, it said it needed to address not only the revenue side of the business, but also the cost side to the equation.

“Like in any other business, Council has to have the financial means to take care of the viability and longevity of this important sales venue.”

Councillor Mustow said he was disappointed at “having to bring this news to its highly-valued beef farming community, and the many local and regional businesses which supported the beef industry”.

While recent saleyard operating results had been favourable, the facility had a deficit last year of $687,614, which the council highlighted the need to fund capital and operational expenses going forward.

Asked if he was surprised the council had taken the dramatic step of shutting agents out of the facility because of the lack of a resolution, CAA president Matt McCormack said the council had been taking a hardline on the issue.

“The last fortnight the approach the council has had has been pretty tough, they have virtually put a gun to our head and said sign it or you’re out.

“As agents we’ve said, if we sign it, the way it is going we will probably be out of business anyway in a short period fo time, so why not stand and fight them now and see where it goes.

“From their approach It doesn’t surprise me they have done this, but I thought common sense would have prevailed by now.”

Mr McCormack said that he had not heard from any member of council since last Thursday’s decision to shut agents out, and said it was unclear at this point how long the standoff may last.