WITH the cattle market nudging a record 800 cents a kilogram Eastern Young Cattle indicator, buyers participating at Thursday’s Elders-Kerr & Co annual spring sale displayed no fear stumping up a sale average of 448c/kg or $1810 a head across its 2600 head penning.

Buying supporting for the under-cover, soft-floored WVLX Mortlake-held sale were mustered from all points and represented every section of the industry competing both at the rail and online.

They competed with bullock finishers and back grounders from Gippsland, local western areas along with orders representing a small parcel of interest from northeast Victoria and NSW. 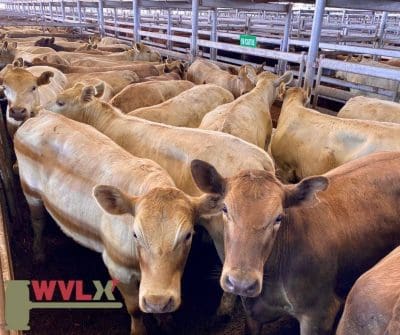 Breeder restockers also displayed an intense interest on purchasing well-breed young heifers and in-calf females for the purpose of herd building and replacements.

A keen long-term observer and regular buyer at this annual fixture said the quality of this year’s yarding was the most outstanding he has ever seen.

Bruce Redpath, Elders said the weight-for-age of the yarding was exceptional and 20 to 30kg heavier than this sale 12 months ago.

The season in the western parts of Victoria from where the cattle were sourced he said had been much kinder than in recent years with an early break to the autumn and mild winter and early spring being beneficial to the cattle’s well-being.

But the money paid he said was also higher than has been seen in recent sales: “it truly was a magnificent result from a normal gathering of buyers”.

“Änd, I’m happy to be quoted on that”, Mr Redpath told Beef Central. 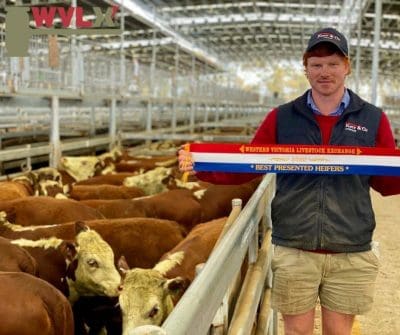 Koolomurt Pastoral wAS awarded the award for “Best Presented Pen Of Heifers”. The well bred Hereford Heifers made to 420c/kg or $1859.16

Kerr & Co’s Zac Van Wegan said the enthusiasm that propelled the sale made it a good day to be on the rail rather than being in the gallery.

“It’s a sign of the times we’re in at the moment” Mr Van Wegen said.

Mr Van Wegan said that the number of sales to exceed $2000 a head was astonishing.

He said a full gallery of feedlot buyers were in the thick of this action and waged strong competition with high-end bullock finishers from Gippsland and the Otway area near Colac.

However, he said the usual 10-20c/kg premium for EU-accredited lines was not as evident for the numbers that were offered in sale.

Nonetheless those that were retained to the EU-system sold especially well, notably the Boyd family’s Minhamite line of GreenHills Murray Grey steers, 420 and 462kg that made 440 and 434c/kg respectively.

A line of the Gubbins family’s Coolana steers, 460kg, also sold especially well at 470c/kg as an EU-accredited line of 70.

The Coolana steers were also judged as the sale’s best presented yard and were awarded at David Powling Memorial Shield.

The market for unjoined heifers was equally impressive and in the 12-14-month-old section averaged one cent a kilogram more than their steer brothers.

The 600 heifers penned across the sale averaged 366kg, $1610c/kg and 440c/kg as several major restocker interests vied especially for the better-bred lines.

Several sales of younger and lighter heifers – sub 320kg – were pushed to rates near and beyond 500c/kg.

These were offered by vendor Stony Point.