A single cattle trade involving the purchase of 2508 Angus heifers completed earlier this year has helped a NSW farming family to get back to where they started financially at the beginning of a two and a half year drought.

Nigel and Kate Kerin, who run the Kerin Poll Merino stud at Yeoval in NSW, have introduced livestock trading over the past 10 years as a way to manage more variable rainfall conditions which have occurred since the 1990s.

They aim to complete each trade within a four month period, because at any given time they can see how much grass they have ahead of them for that period of time. 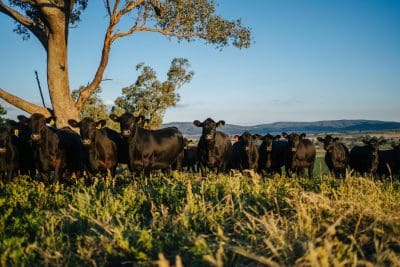 Some of the 2508 Angus heifers the Kerins purchased and joined in a massive AI program before reselling them on AuctionsPlus earlier this year.

Any trade cattle or sheep are only bought if there is sufficient feed to finish that trade before the stock are bought, and usually trade stock are only bought when a forward sale has been secured for those stock at the end of the trade.

“A lot of what we do now as a business is based around fitting in with climate change,” Mr Kerin explained.

Their long term rain fall records show there has been increased variability in their rainfall patterns since 1990s, bringing both more drier and more wetter years.

The Bureau of Meteorology categorises 900-1000mm of rain in a single year in their 650mm rainfall zone as a “one-in-50 year event”.

However, these “one-in-50-year events” have happened three times in the past 10 years on their family property at Yeoval, Mr Kerin said.

As a result they Kerins have introduced a livestock trading model to help them to fully capitalise on these good years when they occur.

“These so called one-in-50-year events, which are now three-in-10, can produce two or three years of revenue in one,” Mr Kerin said.

“There is so much opportunity out there if you’re not locked into the traditional paradigms of grazing.”

The story of a massive trade Mr Kerin completed over the summer months of 2020/21 helps to illustrate how trading can help them to fully capitalise on good seasonal opportunities when they present themselves. It kept raining, so he kept buying, soon assembling over 2508 Angus heifers over a series of weeks.

The purchase price kept rising from week to week, to a point some would argue they were surely too expensive to have any chance of making a positive return.

But Mr Kerin said his focus remained firmly on the average purchase price of all heifers across the entire mob he was assembling, rather than on each individual group.

When spread out from start to finish, the average price of all 2508 heifers he purchased still represented attractive buying in a rising market, according to his budgeting calculations.

Creating a point of difference

The next step was to create a point of difference to make his 2508 heifers stand out in the marketplace from all other Angus heifers being offered at the same time.

This is likely to be up there with the single biggest AI programs ever carried out in Australia.

The huge undertaking was also made possible thanks to a set of fully autonomous cattle yards Mr Kerin spent 15 months designing before they were constructed by Proway on his property in 2015.

All crush functions and gates in the yards are air-operated and remote controlled from a safe place out of the flight zone, with bud boxes also used to facilitate the smooth flow of cattle in and out.

“You’d never think of doing it unless you had a set of yards like this,” Mr Kerin said.

“We were drafting 600 heifers in 35 minutes and it was dead quiet, no noise, low stress, so easy. Technology made everything easy.”

The heifers were listed for sale on AuctionsPlus on Friday, March 5, 2021.

Mr Kerin is a well-known user of social media in Australian agriculture and actively used his Facebook account to help in the marketing of the heifers.

“What we did was told the story from the day those heifers got here until the day they left,” he said.

That entailed posting regular updates and videos drawing attention to the upcoming sale including this ‘guest post’ from Millah Murrah principal Ross Thomson: Mr Kerin used another post (below) to assure potential buyers that the heifers would be “on the market” once bidding reached a price of $2400 per head, to give them the confidence to know the cattle would be “buyable” and worth chasing.

Broken down, that ‘reserve’ price of $2400 per head reflected his buy price, plus the cost of carry, plus a levy the Kerins attach to all trade stock in their business of $10 per month per DSE equivalent, which equates to a return of $120 per DSE, annualised.

“Once I get that I am happy because that is a massive return,” he explained. The entire trade grossed $6.2 million. This included the sale of the PTIC heifers, a small number of classed out heifers, while all preg-tested empty heifers were forward sold to a supermarket buyer.

The trade achieved a 47 percent return on investment.

The increased profitability created since changing their approach to grazing management has effectively enabled the family to continue expanding their business by adding another property to their operation every three years or so over the past decade.

“Climate variability is driving the profitability of our farming business because we have learnt that if we go into containment feeding early with the stud, and leave our landscape intact, we’re back into the market buying animals back in while most producers are still feeding.

“If you can have a paradigm shift of capitalising on those big years, these one-in-50 year events which are now three-in-10, using grazing charts and following the trend line you can keep pouring the animals on whilst that rain keeps coming.

Rapid ‘bounce back’ from drought In December last year Mr Kerin had a number of social media interactions with several croppers west of the Newell Highway who had either just finished, or were finishing, a bumper harvest, one which had effectively put them financially back to where they were at the beginning of a three year drought.

“Is it possible for a livestock producer to do the same thing?” was their question to Nigel.

He responded “buggered if I know”, but said he would be able to answer the question in March

He responded at the time “buggered if I know”, but said he would be able to answer the question in March, once his large Angus heifer trade had been completed.

“The answer to the question is, yes, yes we can,” he told Beef Central this week.

“The end result of this trade was that it financially got us back to where we started at the beginning of a two and a half year drought, and that is exactly what it did.”

As he drives around Central West NSW Mr Kerin says he sees a lot of “moribund, cellulose grass” still standing where the drought broke 12 months ago, but where the grass grew and no one harvested it because they had no animals and told themselves stock were too dear to buy.

He offered the example of a restocker buying an Angus steer.

A restocker who is used to buying Angus steers at $1000 may well baulk at paying $2000 for the same animal.

But when emotion is removed from the equation, the only real difference between the two, across a four month trade, is the interest bill, Mr Kerin said.

All other costs, regardless of whether the steer was bought for $1000 or $2000, are still the same for that animal in terms of freight and cost of carry.

Commission will change slightly, but the main one is the interest bill, which, in perspective, is still very minor:

“That is the only difference. We’re going to have an argument about $13?

“At the moment that is less than two days weight gain.

“I am not saying take the risk and buy dear cattle, I am saying get a forward price on them into the feedlot first, you have got to cover the risk.

“But what I see in Central West NSW is 60 percent of that feed that grew after the rain was never utilised, and that was another hand break on the bounce back of a lot of families.”

A problem shared is a problem solved

The drought took a massive toll on many farming families, Mr Kerin said, leaving many very emotionally battered and bruised, and clouding their ability to make decisions once the season did break.

He said this was where the value of having good mentors was incredibly important.

“One of the things really lacking in Australian agriculture is sharing of problems,” he said.

“A problem shared is a problem solved.

“A big thing we have done is use respected mentors to help us make decisions, because no one is as smart as all of us.

“Whenever we have a major decision to make we share it with our mentors.

“Bringing in mentors can really help all of us in family businesses to remove the emotion out of decision making and to put things into perspective.”