PTIC heifers were in short supply this week, with this line of Watervalley blood Angus heifers, 20-22 months and PTIC to Angus bulls, from Beaufort, VIC selling for $1030, secured by a buyer from Tasmania.

CATTLE numbers continued to rise this week on AuctionsPlus with a total of 11,959 head listed, up 17 percent on the previous week.

The relentless dry conditions have seen the continued surge of numbers listed from both Queensland and New South Wales, with young weaner cattle continuing to dominate listings, accounting for more than 7200 head. Heavy feeder steers + 400kg continue to gain traction online, experiencing a 100pc clearance this week and averaging 340c.

PTIC cow numbers remained steady, totalling 1226, up marginally on last week, with 70pc of the offering coming from Central & Northern NSW. As supply continued to outweigh demand, prices ranged from $880 to $1250 to average $1086, down $53.

PTIC heifers were in short supply this week, resulting in a single line of 20 Watervalley blood Angus heifers, 20-22 months and PTIC to Angus selling for $1030, secured by a buyer from Tasmania.

From Bungendore, NSW a small line of two-year-old Angus heifers with CAF returned the top price. From Hughenden, North QLD, a line of 120 Brahman cross cows & 12 calves sold for $830. These cows were mixed age and joined to Droughtmaster bulls.

This week saw a single line of lighter steers under 200kg return 313c, for a line of 30 Simmental cross weaners, 6-7 months old and weighing 154kg from Warren, NSW.

Steers 280-330kg averaged 327c this week, down 2c on last week and selling from 257c to 351c. Top price was achieved by a line of 90 Angus steers, 290kg from Braidwood, NSW which are headed into Victoria, while from Goondiwindi, QLD, Angus cross steers 301kg sold for 321c to a local buyer. Feeder heifers above 330kg sold from 260-326c, averaging 297c, down 20c. Top price was achieved by a line of Charolais/Angus heifers, 388kg from Wallendbeen, NSW, while from Goondiwindi, QLD a line of 330kg Angus cross heifers sold for 321c and Angus heifers 349kgs from Lockington, VIC returned 314c to a SA buyer. 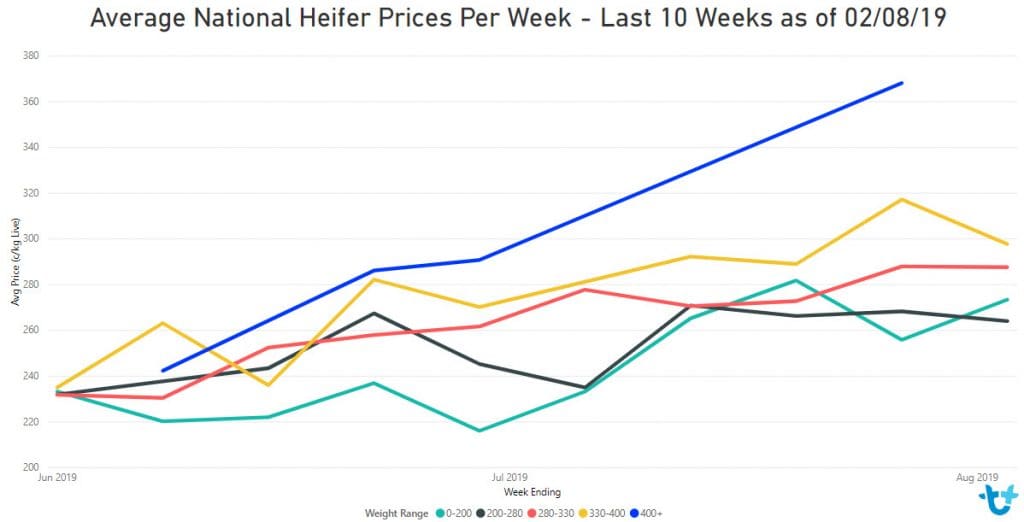