CATTLE numbers bucked the recent trend on AuctionsPlus this week, with catalogue numbers totalling 10,679 head, up 45pc or 3309 head on the week before.

NSW continues to produce the highest demand for young PTIC cows & heifers, with all lots selling to NSW buyers. Prices ranged from $810 to $1260 and averaged $1052, $150 down on last week.

Top price among PTIC females went to a line of 33-34 month old Angus heifers from Menangle, NSW. These Wattletop and Kilburnie blood Angus heifers had been joined to Angus bulls, and will head to Camden, NSW.

Lotfeeders saw value in a number of heavier lines of steers this week, with three lines of Angus steers from Walcha heading into Southern QLD. One of these found a strong price of 346c for steers aged 8-9 months, averaging 290kg.

In a breakdown of young cattle sold this week by weight range: 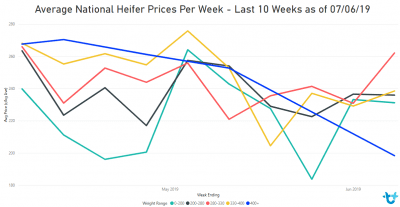