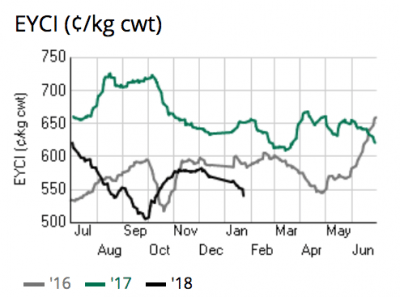 Dry conditions are taking a toll on store cattle markets, reflected in a 10c/kg drop in the benchmark Eastern Young Cattle Indicator yesterday.

The EYCI closed on Tuesday night at 540.5c/kg cwt, down 15c for the week and 110c/kg lower than January last year.

Agents at Roma offered a good quality yarding yesterday, and smaller numbers than the previous week (down by 1400 head to 6274), but the market still endured tougher conditions, with most categories easing in price, with cows back by 10c/kg on average.

At this morning’s Dalby sale where agents yarded 5300 head, a similar number to last week, heavier cows were back a further 5-6c, selling mainly in the 185c-200c/kg range.

Joe Lehman from Grant Daniel Long said the boost provided by some rain near Dalby over the Christmas period was keeping local restocker interest active on lighter cattle and store cows. “Store cows are selling well, and have been making more than fat cows in places,” he said as the sale was underway this morning.

Rod Turner at Landmark Roma said many producers in that district still had dry feed following the rainfall break received in October, but dry conditions and searing afternoon temperatures were putting a lot of pressure on cattle and grass.

Feed conditions were much worse further west of Roma and in Queensland’s Central and North west, where some are enduring seven straight years without a decent season.

“A lot of those fellas have only just got their cattle back from agistment, and they have to sell cattle again,” he said.

Many producers were over feeding cattle and had indicated they would probably sell cattle this year rather than feed them if conditions continue to deteriorate, he said.

New crop sorghum is trading this week at A$280/t delivered Darling Downs, up $10/t in a week. Livestock feed in eastern Australia accounts for perhaps 250,000t per week of grain and wheat is the mainstay grain for poultry, cattle, dairy and pig feeders.

Wheat values currently stand in the $320/t range delivered Downs, with barley a few dollars higher in the high $320s. There is not enough barley available in Queensland and northern NSW to satisfy demand, which means it has to be drawn from the south. This is in direct contrast to last year when barley prices were as low as $100-$120/t on-farm before winter planting.

Everything hinges on rain in coming weeks. A lot of producers are hanging onto cattle in the hope it does rain. If it does, supply will likely dry up as producers hang onto cattle to add weight or grow them out, but continued dry conditions would see more cattle coming onto the market and further downward pressure on prices.