Part of a big line of Droughtmaster and Santa cross backgrounder heifers out of Blackall being offered due to dry conditions, these 11-15 month olds averaging 268kg sold for $755 this week.

CATTLE numbers on AuctionsPlus surged to 10,201 head this week, reflecting the prolonged dry conditions across many regions.

Prominent among listings, and reflecting the still desperate conditions across large parts of Queensland, were numerous lines of cows and calves and PTIC cows out of the state’s central west and northern regions. Many carried assessor and vendor comments referencing ‘extremely dry conditions’ as underlying reasons for sale. While some found buyers at reasonable rates, other remained unsold, either attracting no bids, or remaining below reserves.

Out of Blackall in Queensland’s central west, four lines of Enniskillen Pastoral Co Droughtmaster cross backgrounder heifers totalling 598 head, 12-18 months of age sold from $600 (two lines averaging 202kg, sold to buyers at Tenterfield, NSW) to $755 for a heavier line of 138 heifers averaging 318kg for $860. Two other lots totalling 240 head, averaging 258kg, attracted no bids, with a reserve of $735.

While some welcome rain earlier in this month across good parts of eastern Queensland and northern NSW stimulated some interest from restockers, Friday’s Queensland/NSW weekly sale saw 55 of 94 lots either passed in or failing to receive a bid – a rate of 58 percent. Forecasts of more heatwave conditions in some areas of eastern Australia this week did not help.

Proven breeders continue to be sought after in southern states, selling to a top of $1720. Mixed age cows averaged $1275 and sold to $1500, for a line of 3-9 year old PTIC Angus cows from Walcha, NSW.

Most cows and calves listed were from Queensland. A line of Brangus cows from Hughenden, aged 24-30 months made $1640. With 82kg calves at foot sired by Wagyu bulls, they were purchased by buyers from Grafton, NSW.

A line of 132 Brahman & Brahman X cows with their second calf at foot from Prairie, north Queensland made $1320.

In other larger Queensland sales, a selection of 225 females from Barcaldine and Isisford, consisting of predominantly Santa & Santa X cows & calves and PTIC females. A line of 3 to 4 year old cows with 202kg calves at foot made $1350, while mixed aged PTIC cows made $950.

A line of mixed age Angus cows and calves aged 4-9 years, from Wangaratta, VIC sold for $1900.

The Maiden Creek herd dispersal from Wollomombi, NSW, offered 560 PTIC Angus females and 14 Angus herd bulls, for a 100pc clearance. Three and a half year old cows topped the female offering at $2010, while the bulls sold to a top of $6500.

The Baanenuc herd from Skipton, VIC was partly dispersed, offering 104 black baldy cows & calves, including a line of four year olds topping the offering at $2230, with 200kg calves at foot. 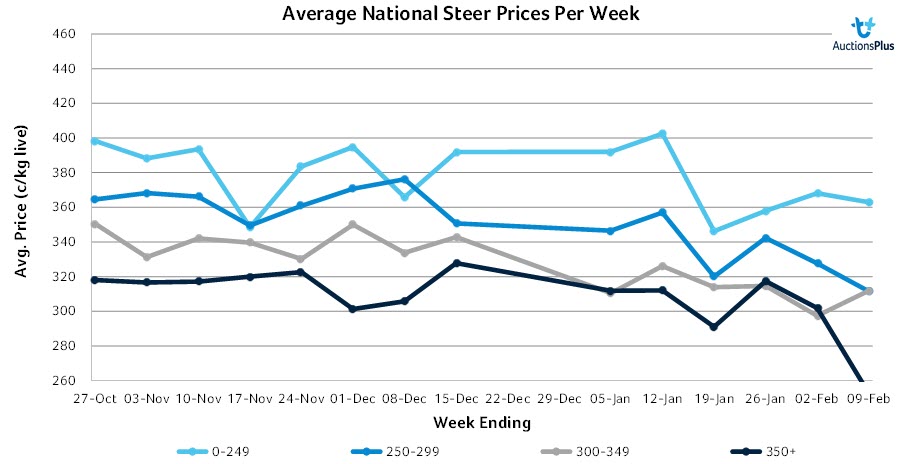