NUMBERS lifted to 9079 head on AuctionsPlus this week, an increase of 2000 on the previous seven-day cycle.

Queensland contributed the biggest portion of the rise in numbers offered, up 1300 head to 2100, as people returned to work after Beef 2018 week in Rockhampton.

Clearance rates have steadied and 53pc of stock offered were sold at auction, attributed to vendors’ expectations aligning with market conditions.

Interstate bidders bolstered competition on New South Wales stock, notably lines of PTIC females from Walcha which were sought after and secured by South Australian buyers in the Eastern States auction.

Numbers of PTIC females were boosted heavily by the Koolewong Angus herd disperal from Braidwood, NSW which offered 333 stud and commercial cows. These females presented a good opportunity to secure proven genetics and buyers responded, with purchasers from NSW, VIC & SA. Stud females averaged $1825 and sold to a top of $2270 for a line of seven-year old cows.

Nationally, PTIC females were mixed in quality and averaged $1180. The top price of $1750 achieved by commercial females also came from Koolewong Angus for a line of 48 cows, rising four years.

Just shy of 5000 head were on offer in the fortnightly AuctionsPlus Weaner & Yearling Sale.

“It was difficult to gauge where the light store market would be following on from a softer market last week, both on AuctionsPlus and in saleyards in northern NSW and southern Queensland. Dry conditions are prevailing along the NSW/QLD border but producers further north, who are experiencing a fairer season, seem to be willing to buy cattle at the current market rates,” he said.

In terms of Andrew’s clearance rates, he said conversations with vendors pre-auction was key.

This week’s Tasmanian cattle sale offered 183 head over 12 lots and listings were dominated by weaners, the majority of which were purchased from NSW. Murray Grey/Gelbvieh heifers from Mayberry, averaging 310kg returned 286c. PTIC Angus cows from Liffey in the state’s north, aged 2-5 years, reached $1350. Also from Liffey, 19 PTIC Angus cows aged 6-10 years made $1155 to a buyer from Southbrook, Queensland. 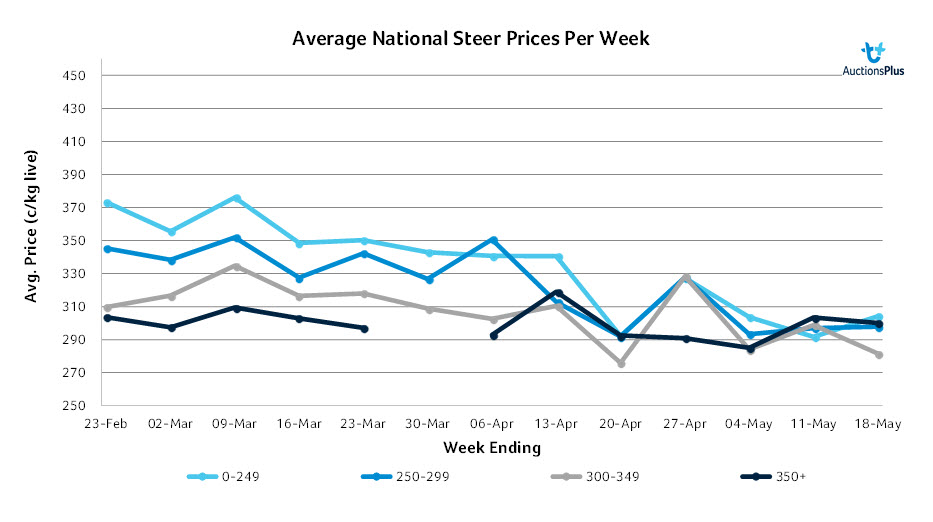