ANGUS first-calf heifers sold to $2170, while heavy feeders averaged 325c/kg in a smaller offering on AuctionsPlus cattle sales on Friday.

Listing numbers dropped by 14 percent to 8570 head on the previous week, with the biggest declines seen in the southern sale catalogue, where numbers close to halved at 2908 head.

Bigger numbers flooding all southern cattle markets late last week have caused the first significant price correction in many months, though physical markets did not seem to be as affected.

Heavy feeder steers were the closest to steady on the previous week’s AuctionsPlus sales, with other weight category steers dropping in price. Having said that, EYCI type cattle (vealers/yearlings) still made an average of 618c/kg carcase weight, on par with the best reports from saleyards last week.

In a breakdown by weight categories: 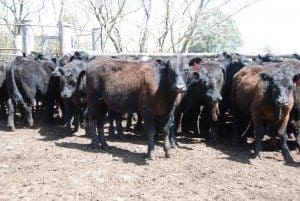 Smaller numbers of breeders reached their reserve in Friday’s sale, though price expectations from vendors remained sky-high. Some may by now have reached a post-sale negotiated price.

Using the new ‘Certified Organic’ identifier button available now available on AuctionsPlus listings for the first time, was three lines of Santa and Santa cross cows ex droughted Barcaldine in western Queensland. The cows, offered in three groups from 346-390kg, 2-9 years, sold from $850 to $1040 a head.