WIDESPREAD rain last week in parts of all three eastern mainland states contributed to a lift in prices across many categories in Friday’s AuctionsPlus online sales.

Cattle numbers were steady on the week previous at 6256 head, with more than half the listings coming from Queensland.

Quality breeders offered saw cattle travelling from parts of Queensland as far as central NSW and even Victoria, highlighting the ability of online selling to target a wide buying audience.

Strong sales were seen across all categories on Friday. 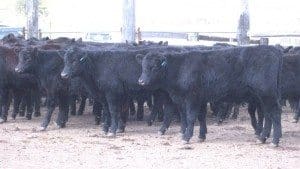 Part of a line of 130 Walcha Angus weaned steer calves that made 431c/kg on Friday. Click image for larger view

A line of 130 Angus weaned steers 223kg from Bydand Pastoral Co, Cooplacurrilpa, Walcha made a phenomenal 431c/kg liveweight to return $960 a head. That’s not bad for 7-9 month old calves only weaned from their mothers on August 20, and still on-property.

In a year where the word ‘record’ has become something of a cliche, the steers set yet another high-water mark on a c/kg basis for conventional (non-Wagyu) cattle sold at auction in Australia.

The yards-weaned calves, carrying Knowla, Hazeldean & Boony Brooke Angus genetics, ranged in weights from 191 to 302kg. Listing comments from assessor, Nick Hall from Elders Walcha said “These steers have a very good reputation for performance, and will suit backgrounders or fatteners to take through to heavier weights. The steers should bound ahead on crop.”

It was one of a series of strong sales recorded on Friday for Bydand Pastoral, which sold four lots totalling 268 head.

Included was a second mob of 54 Angus x Hereford weaned steers, similar weights and ages as the Angus line discussed above, which made 397c/kg. Two lines of Angus and Angus x Hereford heifers, totalling close to 100 head, both 16-20 months around 273kg, made 334c and 293c/kg, respectively, for the same vendor.

In overall results in Friday’s sale:

Standout heifer prices include Hereford cross heifers at Blackall weighing 177kg making 322c or $570 to a Victorian buyer; 299kg Charolais cross heifers at Surat making 309c or $925; composite heifers at Uralla weighing 322kg selling for $313 or $1010; and 352kg Droughtmaster steers out of Marlborough making 310c or $1091.

PTIC first-calvers topped at $1720 on Friday for Angus heifers in northern NSW in calf to Angus, and mixed age lines of PTIC cows made $905 to $1040, including a line of Santa cows finding a home on the Victorian border.

Cows with calves at foot are a clear buyer preference at present, with prices steadily increasing to average $1751 and topping last week at $2150 for eight-year-old Victorian Angus cows with Angus calves.

In the Wagyu segment of Friday’s catalogue, the market was topped by a line of 25 F7-Fullblood backgrounder steers offered by an Allora (Qld) breeder, 218kg at 12-14 months, selling for 624c/kg or $1360/head. Their heifer siblings averaging 218kg averaged 599c.

In other Wagyu segment results on Friday: