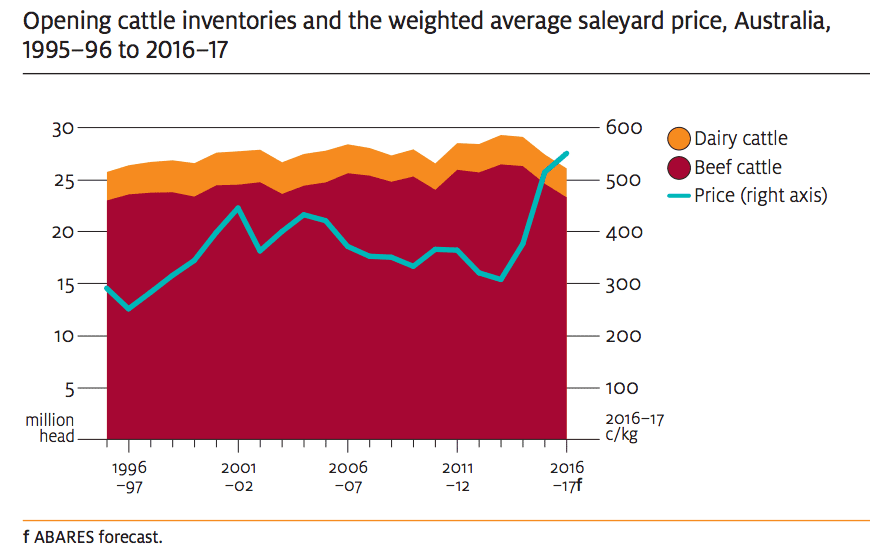 ABARES has revised up its forecast for cattle prices for the next 12 months.

That is up on the 517c/kg average it predicted for 2016-17 in its previous quarterly report in June.

What has changed in the past three months? Rain and improved seasonal conditions for many cattle producing areas.

Despite the downward pressure being placed by weaker export demand on prices for cows and heavy steers, ABARES believes the combination of stronger restocker demand and limited cattle supplies will push average saleyard cattle prices higher in 2016-17.

That was 41pc higher than the previous financial year.

ABARES places the national beef herd at 23.3 million head, the smallest in 20 years.

However it expects cattle numbers to grow to 24.1million head in the next 12 months, reflecting the increased herd rebuilding and associated sharp reduction in cattle slaughter.

Slaughter is forecast to reduce by 15pc to 7.5 million head. This will cause Australian beef and veal production to fall by 9.5 per cent to 2.1 million tonnes (carcase weight).

Increasing competition in major export markets is expected to place downward pressure on the value of exports.

Beef and veal exports are forecast to fall by around 12 per cent to 1.03 million tonnes (shipped weight).

Average export prices are also expected to decline as increasing competition in major markets is expected to reduce demand for Australian exports. As a result, the value of Australian beef and veal exports is forecast to decline by 12.5 per cent to $7.3 billion.