ALC says the purchase will bolster its stock numbers at Terrick Terrick Station near Blackall, which was recently acquired by AAM.

The sale is part of a move by Georgina Pastoral to transition more comprehensively to Wagyu genetics.

Relocation of the stock from Georgina Pastoral Co’s Lake Nash Station, on the Barkly Tablelands of the Northern Territory, commenced in early June and will continue into mid to late July.

No price indication was provided, but similar lines of quality cows and calves, and PTIC cows (without Organic certification), were making $2000-$2600 on AuctionsPlus on Friday.

The purchase is one of the larger cattle-only deals (not bound with a property sale) since SA’s Tom Brinkworth bought around 18,000 heifers from the Australian Agricultural Co back in 2013, driving them from the Barkly to Hay, NSW.

“This was a rare chance to purchase a large and complete breeder herd with genetics to meet a range of markets, while infusing higher-quality genetics into our operations without compromising adaptability to northern conditions,” Mr Gallagher said. 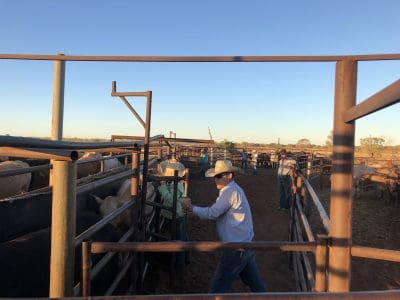 “Georgina Pastoral has a long track record of premium composite breeding and this transaction allows us to increase the stocking rate of Terrick with cattle that will achieve high performance under the Blackall region’s climate.

The-newly created ALC has been established by AAM to drive its expansion across Australia’s $28 billion red meat industry.

“This is a foundational investment for ALC and we thank the Hughes family for working with us to create such a unique opportunity and transaction,” Mr Gallagher said.

“The Georgina Gold herd was originated by Stanbroke Pastoral Co using a base of Santa Gertrudis females to which Charbray bulls were introduced,” Mr Hughes said.

“When we took ownership, we introduced Ultrablack bulls and the herd have been performing exceptionally well at Lake Nash. Terrick is a beautiful place and they will go on to perform there just the same, and we certainly wish AAM well with this purchase.”

Selling agent, Daniel McCullough, said the purchase of the herd by ALC was in line with AAM’s broader vision and long-term approach to investment in the livestock industry.

“This is one of the largest private paddock sales recorded and McCullough Agencies is very proud and privileged to be part of this,” Mr McCullough said.

“The Georgina Pastoral cattle are very highly regarded within the beef sector and it is great to see such an impressive line purchased by such a dynamic and diversified Australian agricultural business.”