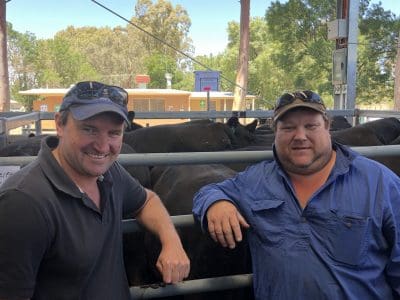 All five yards from a 55-head draft of the Connamarra Angus heifers – depastured for an eight week calving to commence mid-February – were cleared on bids of $2000 a head or more while yards from GE & MA Hill, Innesfail, Ruffy ($1950) and Good Hope Pastoral, Bonnie Doon ($1900) were priced close behind on a slightly later joining to commence calving early- to mid-March.

“Local weaner vendors like the earlier joined females” Mr Curtis said. “They provide the extra time for their calves to reach the nine to 10 months of age for the annual Euroa weaner sale held each December”.

Mr Curtis said the better-bred and earlier joined February-March calvers had all met pre-sale price expectations, making from $1600 to the market top of $2120, while other later joined and smaller framed lots made upwards of $1400.

While the joined heifer lots were the feature of this annual fixture a limited display of joined older-aged cows, some with calves at foot, made from $1050 to $1850 depending on aged, condition and the age of the calves at foot. 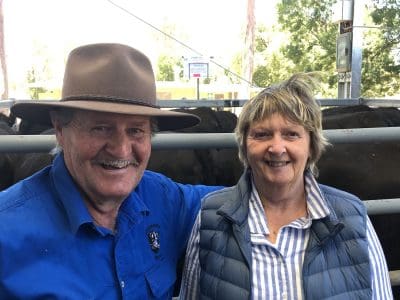 Michael and Olga Hill, Ruffy, sold 55 of their Connamarra-blood and bred Angus heifers joined to top line Angus bull for a mid-February calving. The Hill’s have been breeding Connemara-blood Angus for about 38 years.

Selling agent, Col Broughton, Landmark, said the line was worth on their slaughter value.

Michael Curtis said the main reason for the limited supply joined and calved older females was vendors had elected to retain their numbers where adequate feed and water reserves prevailed. 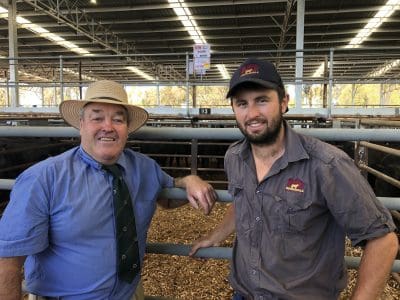 “Significant numbers have also been brought into the district from up north”, Mr Curtis said.

A further feature of the Euroa December female sale, which offered about 1700 head, was the annual drafts of unjoined heifers comprising both yearling-off and weaner lines.

Mr Curtis said that similar to the previous week’s steer sale, where expectations were higher than the market could deliver, the better-bred and heavier lines suiting breeder restockers and the lot feeders sold best but sales of lighter opportunity/backgrounder heifers were somewhat disappointing. 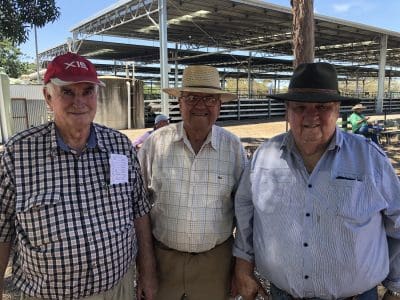 Old-timers, Kevin Hill, Euroa, Jim Rockcliffe, Euroa and Mike McGuinness, Shepparton jokingly “bought and sold at lot of cattle on the day“ but couldn’t remember who would cart them.

Sales of the higher-priced and better-grown young heifers were made mostly in the 250- 280c/kg price range while the lighter heifers mostly made 200 to 240 cents. 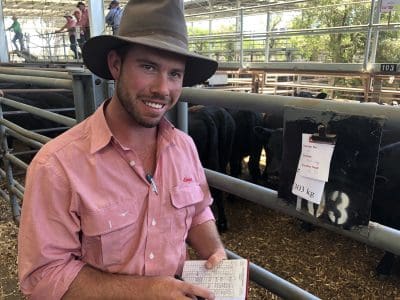 Mansfield agent, Ryan Sargeant, Elders, was a keen supporter of Euroa unjoined heifer for both breeding purposes and lot feeding.