The on-again, off-again livestock export market of Turkey is building up again as its Government moves to import more cattle to control high beef prices in the country.

Turkey has at times been one of Australia’s larger cattle export markets.

However, the high CIF (cost, insurance and freight) price of Australian cattle landed in the market, and resistance from some Turkish importers to the cost of complying with Australia’s ESCAS animal welfare standards, conditions not required by other exporting nations, have diminished Australia’s trade to the market.

Most of the increased volumes of cattle flowing into Turkey are being sourced from South America and Europe.

Australia’s share of the market is currently very small. Australia’s first cattle shipments to Turkey for 2017 occurred in October, totalling 11,253 head. Another shipment left Fremantle in November and arrived in Turkey a few days ago.

While fewer Australian cattle are going to the market, the increased trade activity to Turkey and other Middle Eastern destinations has absorbed several AMSA (Australian Maritime Safety Authority)-accredited livestock export vessels that have previously been used for long haul shipments from Australia.

With Australian cattle exports to all markets down by 20 percent year-on-year, vessels such as the Ocean Shearer, Ocean Drover, Ghena, Nada, Yangtze Harmony, Rahmeh and Brahman Express are now on runs from South America or Europe to Turkey and other markets in the region including Israel, Egypt and Jordan.

Driving Turkey’s increased appetite for cattle imports is a decline in domestic red meat production in the country which is pushing up beef prices.

The Turkish Government is offering cash incentives to encourage Turkish cattle producers to breed up domestic herds as a longer-term strategy, while ramping up imports of feeder and breeding cattle to improve supply and reduce beef prices in the short-term.

According to the Turkish Statistical Institute, the Turkish national cattle herd was calculated at 14.2 million head in 2016 (including buffalo), 0.6 percent higher than the previous year.

Like China, Turkey will only accept cattle from outside Australia’s Bluetongue Possible Transmission Zone, and has a preference for Bos Taurus cattle. The breeds identified as preferable for the 50,000 head young farmer incentive program are Simmental, Brown Swiss, Charolais and Hereford.

With cattle imports to the region increasing, South American welfare groups are mounting campaigns calling for the phase out of live exports from their region, and in the interim have called for countries like Brazil to adopt a regulatory system similar to Australia’s, which makes exporters legally accountable for ensuring the supply chains to which they provide animals in importing countries meet international standards.

One Australian with significant first-hand knowledge of market conditions in Turkey is Geoffrey Beere, an animal welfare consultant who has had more than 25 years experience in international markets with Meat and Livestock Australia (MLA).

Mr Beere said it is very difficult to encourage the use of new technology in Turkey’s cattle and sheep processing sector, largely because Turkey does not historically process many, or any, livestock for export.

The situation is different for Turkey’s poultry industry. Turkish processors have adopted technology to allow them to export, and now export large volumes of poultry, with domestic poultry plants also now benefitting from the same technology adoption.

Historically Turkey, like its western neighbours, only feedlots bulls. No HGPs are used in the market, and steers tend to get too fat and are penalised on price.

Mr Beere said feeder Euro bulls from the EU fetch a premium in the market. “Turkey has always discouraged the importation of Zebu cattle because they thought that all Brahmans came from Ethiopia and the Sudan,” Mr Beere explained.

“These Brahmans could be 5-7 years old and older and only have a live weight of 400kg, they were bad performers, tough and had humps.

“I was lucky enough to have a client who purchased 5000 feeder cattle from Mexico.

“As soon as the Turkish feedlotters worked out that most of these Brahman cattle still had temporary teeth at 350-400kg they purchased them.

“When in Turkey I spent a lot of time promoting Australian Brahmans mainly so that it would give Australia some flexibility in supply.” 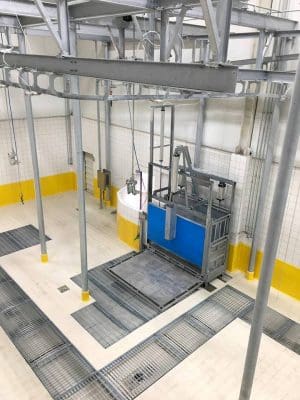 He said most Turkish cattle handling infrastructure caters to Euro and dairy females with single file races, which were not well suited to Australian cattle having to stand for long periods.

As a long time consultant for MLA, Mr Beere travelled widely upgrading facilities overseas, helping to lay the ground work for cattle exports from Australia. The legacy of this time there is now visible in animal welfare improvements to several processing facilities.

“After five years in Turkey it was really interesting and satisfying to see small Beere designs and upgrades appearing in new or upgraded Turkish slaughterhouses and abattoirs,” he said.

“This was achieved mainly through working with engineers and management, and it has been pleasing to see some of our designs incorporated into new Turkish abattoirs.”