Measuring the health of your bank account by looking only at what you’re earning, but not what you’re spending, obviously wouldn’t be a recipe for long-term success. 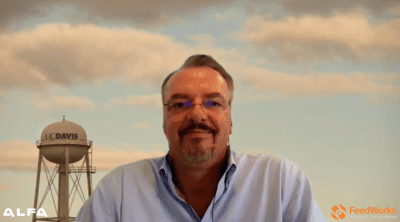 In a similar way, using a greenhouse gas accounting system that measures emissions from livestock, but not what is being removed from the atmopshere by the same biogenic system, isn’t going to produce a realistic or useful outcome.

The cattle sector’s warming impact is not zero, he said, but it is a fraction of that compared to fossil fuels.

The chart below highlights the different sources of greenhouse gas emission in the United States.

At the bottom, coloured yellow, are direct emissions from the beef industry. “It is important to be realistic about the contribution of animal agriculture on our greenhouse gases,” Dr Mitloehner said.

Emissions from cattle are far from the “insurmountable problem” opponents of animal agriculture and meat consumption often portray them as.

A major problem for the livestock sector comes down to how the global narrative around emissions is framed.

The most commonly used approach to accounting for emissions is the Global Warming Potential 100 (or GWP100) method, which uses a formula to convert gases like methane and nitrous oxide back to Carbon Dioxide equivalents.

However, a major shortfall of the metric, which scientists have drawn increasing attention to in recent years, is that it does not account for the actual warming impact of methane.

Scientists such as Dr Myles Allen and his team of researchers at Oxford University have demonstrated that GWP100 method drastically exaggerates the impact of a constant source of methane, such as a herd of cattle, on warming.

Dr Mitleohner explained that methane emissions from cattle originate as CO2 captured from the air by grass as part of the photosynthesis process. The grass is consumed by cattle and some of the original CO2 is then belched back into the atmosphere as methane. 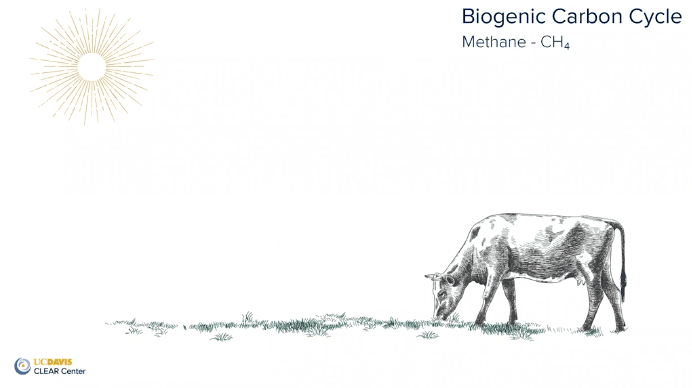 Methane is a much more potent greenhouse gas than CO2 but is also a much more short-lived one, spending a fraction of the time in the atmosphere, about 10 years, before it is broken down by hydroxyl radical molecules into atmospheric CO2 which becomes available again for photosynthesis, forming an ongoing, continuous biogenic cycle.

By contrast, CO2 originally captured from the atmosphere eons ago and released back into the atmosphere from the burning of fossil fuels for cars, trucks, ships, planes and power plants is effectively “new and additional carbon” that takes more than 1000 years to break down.

Added to this is the issue that CO2 is a “stock gas” that stays in the environment and accumulates in the atmosphere with every new emission.

Methane is treated by public policy makers as if it accumulates the same way, under the GWP 100 system.

However, that is not the case, Dr Mitloehner said, because the atmospheric removal process of methane makes it a “flow gas”.

“Methane is not just produced, it is also destroyed, and we need to account for both, the production and destruction,” Dr Mitloehner said. Global methane emissions needed to be accounted for in a budget that take into account not just emissions (as shown on the left of the above chart) but also sinks, as shown on the right of the chart. The global methane budget shows that various sources of methane produce around 560 teragrams of methane annual. This is effectively where the story often ends. However, sinks offset some 550 teragrams a year.

He said the most recent IPCC report released last month also recognised that the GWP 100 accounting system overinflates the warming potential of a constant source of methane such as cattle by a factor of 3 to 4, and also does not account for the atmospheric removal of methane.

“And that is a big problem because what type of accounting is that, when you only look at the one side of the ledger and not the other side?,” he said.

“Imagine to going to the bank and telling your banker from now on you only consider your income and not your expenses.

“This is just untenable, what we have been doing with methane and methane accounting, and because this is such a big deal for us in animal agriculture, we need to get this right.”

Part of the solution lay in the GWP Star alternative to GWP 100 which has been developed by the Oxford University research team led by Dr Allen.

The GWP Star system demonstrates that a cattle herd with a stable rate of emissions can reach a point of climate neutrality.

A herd in which emissions are strongly reducing – such as the California dairy herd which has reduced methane emissions by 25pc by using manure technologies – is described as producing “negative warming”, or in effect, cooling. Other tools involve feed additives that are shown to reduce methane emissions in ruminants.

(More details have just been released by Dr Mitloehner’s team in a new white paper showing how it is possible for beef and dairy to reach climate neutrality – click here to view: clear.ucdavis.edu)

While the use of feed additives shows significant promise for reducing methane emissions from cattle, Dr Mitloehner also sounded a word of caution about “potential unintended consequences”.

He said an important part of the equation surrounding additives is their effect on not only what animals belch out, but also what animals excrete.

“That is a step most people have left out of this point and as we recently found, we shouldn’t have left that out.

“Because you can reduce enteric methane with feed additives, but then increase emissions from the manure, so we don’t want to do that obviously.”

He said one recent paper indicated that a certain additive known to reduce enteric methane can make its way to animal manure. Nitrous oxide generated when that manure was applied as a fertiliser could potentially offset the gains achieved through enteric methane reductions.